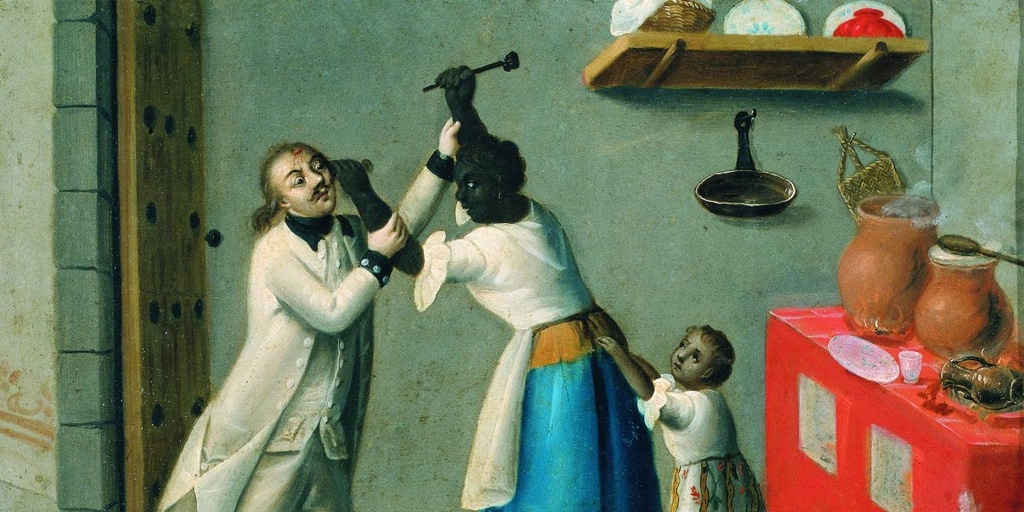 Exhibition ‘Present! ‘An American Latino History’ This Is the First Institute That Won’t Have Its Own Building in a Decade

Detail of the painting ‘De Español y Negra, Mulata’, on loan from the Museo de America

A small painting has traveled the 6,000 kilometers that separate Washington from Madrid, the first exhibition to be on display from this June 15. National Museum of American Latinos in Washington. Among all the points of association of shared heritage, and Spanish involvement in the North American Hispanic community, stands out ‘De Español y Negra, Mulata’, painted within the genre of ‘caste’ in the late 17th century in Mexico was. Picture’. This style was a fashion in the Viceroyalty of New Spain, family portraits that represented the fruit of relations between whites, natives and Africans in which the population was classified in a systematic way and according to origin. It has been handed over by the Museum of Spanish America.

in seminal sample ‘Present! An American Latino History’ The museum managers seek to bring together, through synthesis, what they consider key concepts, moments, and biographies of the historical and cultural legacy of Latinos in America. The Spanish presence is highlighted at two different points in that history: the legacy of colonialism and slavery and the war in Cuba. To the curator of the exhibition, Ronald Woodman , the reason being “to show that colonization was not in fact a benign process but, in principle, an exploitation of natural and human resources.” Woodman explains that this new exhibit stems from a survey conducted among visitors to the Museum of American History, who said they were unaware of more elements of the colonial past other than the Anglo-Saxons.

at the moment the National Museum of American Latinos was born in a small gallery About 420 square meters inside the National Museum of American History as it has been most recently authorized by the Capitol in December 2020. If it were, it would be at the famous National Mall, a national park on a vast esplanade in the heart of Washington, surrounded by the Capitol, the White House, and monuments to Lincoln and Jefferson. At the moment it already has a management team, which is also seeking funding for its construction and the acquisition of historical and artistic objects.

Director of the Museum, George Zamanillo ensures that it will understand the Latino community as “a very diverse community with many different nationalities that live here in America, such as culture, art, music and also the history that we share here.” How to arrive and strive to be free » When asked about the contribution of Spanish immigrants to America, Zamanillo affirmed: “The museum is more about Latinos in America, the person who lives here … How Latinos in America live, what Latino cultures have in common here in America, not outside of America».

In 2020, amid a wave of racial protests over the police killing of George Floyd, protesters toppled and defaced not only statues associated with the colonial or slave-owning past, such as those of Christopher Columbus or conquistador Juan de Oñate, but also Miguel de Cervantes. And also of Don Quixote. When asked about these matters, and the influence of authors such as Cervantes in North American literature, Zamanillo confirmed that in future exhibitions the museum will also seek to debunk the myths. “A museum might interpret these connections and stories because there’s a lot of ignorance, like if a person has an idol and because they’re Spanish they think they’re a bad person,” he says.

At the moment, the various waves of Latin American migration to the US have a prominent place in this exhibition, including life on the border, the crisis of Cuban rafters, and the Puerto Rican lifestyle in New York. Exhibits range from priceless altar pieces such as the Santo Niño de Atocha, painted in Santa Fe in the 19th century, to native Venezuelan costumes. carolina herrera , The visitor also finds one of the rafts used to escape Cuba in the 1990s, which stands out for its small size. What attracted the most visitors, however, was a stunning rumbero dress by Celia Cruz emblazoned with the Cuban flag.

Although the Spanish Empire took little part in the slave trade due to its limited presence in Africa, it was an essential client of those, particularly Great Britain and, indeed, along with Brazil, one of the last Atlantic powers. Were. Ban the slave trade, deeply rooted like slavery, especially in Puerto Rico and Cuba. It is the reality that is reflected and exposed in Exhibition ‘Present! An American Latino History’ ,

The exhibit states that “Spanish colonialism made Spaniards and other Catholic Europeans a privileged minority in places where the majority were black, indigenous and mestizo communities.” He states that “it is probably impossible to establish how many millions died as a result of the new diseases and trauma of colonialism.”

Such exhibits reflect the exchange of one power for another in the section devoted to the war in Cuba, when “American imperialism” broke out, “the seizure of the Philippines, Hawaii, Puerto Rico and Cuba by America.” It also refers to the Monroe Doctrine, with which Washington claimed the rest of the American continent as its sphere of influence, in which it could intervene.

According to Eduardo Diaz This first exhibit seeks to “explain the profound contribution of our community in making the United States of America this nation and influencing its national culture. The history of what is now called the United States of America is deeply rooted in the history of the United States,” said John C., deputy director of the museum. It is long. So it made us make very difficult decisions. What is left? What is not left? The good thing is that there will be other exhibitions before the new museum opens and we will have the opportunity to tell more.

For Díaz, this exhibition is “about the Latino-American community, not the Latin American community nor the Spanish community.” “We are 60 million people in this country that has a long history and a rich culture. So it is about that experience, although we have pieces from Spain,” he says.

What is Bear Market? An economist explains

US Open ’22: Looking back at the last century, key moments of the US Open