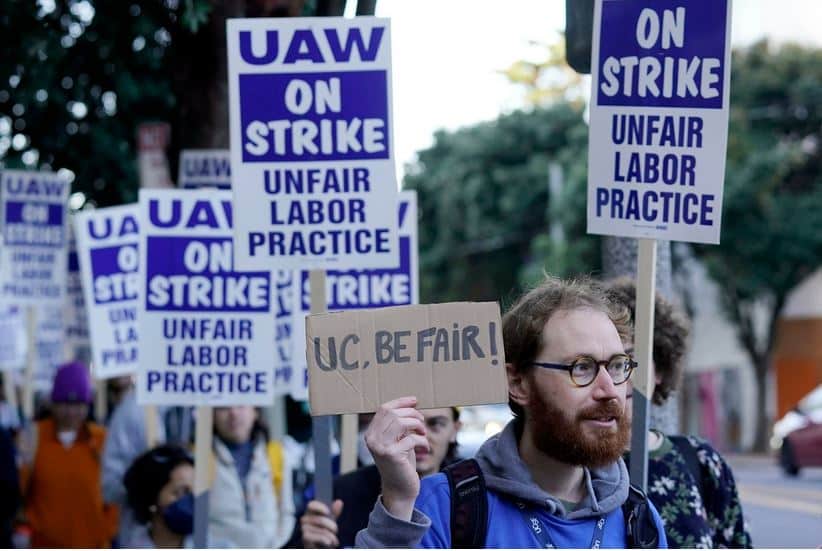 Workers’ strikes, unionization campaigns, mobilizations and other mass actions, including 115,000 freight train passengers, nearly 50,000 University of California academics, thousands of nurses, flight attendants, warehouse workers, cafeteria workers, supermarket workers, journalists and others across the country, promising a resurgence of the labor movement are part of a wave of actions to be taken.

In this city, more than 1,000 New York Times newsroom workers are preparing to go on strike this week, fed up with their bosses in 20 months of negotiating a new contract, as 1,500 striking part-time academics march in front of the Gates. have been More than 8,000 workers at New School University, and at the same time in New York Harbor, Staten Island, who were the first to unionize at an Amazon warehouse, sign their first collective bargaining agreement supporting unionization of their colleagues Want to Other parts of the mega-company are some local manifestations of what is happening nationally.

Actions range from new efforts to unionize companies in the service sector to new offensives that include strikes to win better terms in collective contracts in traditional industries. And they’re winning: unions won more elections (to unionize) in 2022 than in any year since 2000. Over 288 strikes have taken place to date, involving three times as many workers as in 2021.

In addition, according to the most recent Gallup poll, the American public’s approval rating of unions has reached 71 percent, the highest point since 1965.

Perhaps most notable is the rise of new independent unions within anti-union companies, for example, Starbucks workers who managed to unionize 250 stores in one year – even though the company still refuses to negotiate collective contracts – As well as the new Union Joe, supermarket chains like Trader Joe’s want to continue unionizing more Amazon facilities.

weakest moment in nearly a century

At the same time, unions in sectors such as railways, hospitals, airlines, ports (dock workers), parcel companies, universities, museums, supermarkets and public schools were also feeding the vitality of a labor movement that had stagnated and lost its momentum. It is the weakest in nearly a century as a result of the neoliberal onslaught launched by the political establishment and business sector in Washington from the presidency of Ronald Reagan in the 1980s until now.

There have been at least 630 labor strikes at 980 locations nationwide this year, according to data from the Cornell University School of Labor Relations… (https://striketracker.ilr.cornell.edu). Requests for elections to set up new unions increased by 53 percent in fiscal year 2022 compared to 2021, the highest rate since 2016, according to official data. Some experts comment that the level of union activity and other mass actions by labor organizations has not been seen since the 1940s.

Among these actions is the current largest college strike in history involving 48,000 academic workers – including graduate students, among others – in the nine-campus University of California system that has now been going on for three weeks and has been supported by students and faculty, which could have wide implications for the future of labor relations in the United States. For now, officials at that public university are trying to divide the strikers, providing concessions and benefits to some and not others.

Some observers attribute this wave of union activism to the arrival of a president who vowed to be “the most pro-union president in history”. In fact, Joe Biden’s presidential campaign began at a union in Pittsburgh, and he has since repeated his anti-neoliberal slogan that “Wall Street didn’t build this country, the middle class built this country, And unions created the middle class.”.

Though he has reversed official attacks on unions and labor rights, named a pro-union labor secretary and forged ties with national unions during his first two years in the White House, Biden last week pushed for federal intervention. Angered some of his union colleagues. Stopping a possible national strike of more than 100,000 freight railway workers scheduled for 9 December on the grounds that it would cause serious damage to the national economy.

Leaders of some of the unions involved denounced the cancellation of their right to strike with the enactment of a law that forced them to accept a collective contract, which the majority of their members had rejected over a long term focused on working conditions. was rejected in a dispute, including the possession of days. Sick pay in an industry that last year generated record profits of $20 billion while cutting its workforce by 30 percent. Inter-Union Railroad Workers United tweeted, “Biden” will go down as one of the biggest disappointments in labor history.

This new wave of action is a rebellion against the results of the neoliberal agenda of the past four decades, which have led to levels of economic inequality unprecedented in nearly a century.

Various academic investigations have shown that the decline of federalism is directly related to the increase in economic inequality in the United States. Only 10.3 percent of the working population – 14 million workers – is unionized (in the private sector, just 6.1 percent); In the 1940s and 1950s, about a third of workers had a collective contract.

Sarah Nelson, president of the 50,000-member union, the Flight Attendants Union, recently remarked: “Since workers generally won the right to strike in 1935 (to promote collective bargaining), companies and their political friendships have pushed them away.” dedicated every day to doing so. . . It’s why we can’t make widely popular policies and why our democracy is nearly dead.”

“After decades of struggle, we are at a turning point filled with enthusiasm, energy and hope,” the AFL-CIO president recently announced in an announcement to fund $11 million a year for union organizing campaigns.

D. Taylor, president of the national union Unite-Hair – representing hotel and restaurant workers, among others – remarked that “there has never been a hotter time to organize than now. Workers fed up with extreme inequality and exploitation have arrived and are ready to fight for the betterment of their conditions.”

The small ‘store of the future’ trend is real