They call for more popular mobilization in Peru 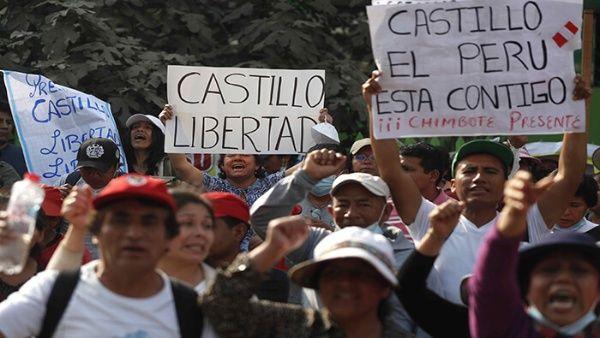 Social organizations, trade unions and indigenous movements in several regions of Peru called for a national strike, in rejection of the Congress-imposed government of Dina Boluaarte, for the independence of President-elect Pedro Castillo and the realization of a constituent process.

Telesur reports that there is widespread malaise in the South American nation and this is expressed with blockades of highways, the seizure of airports and universities, demonstrations in front of public buildings, fierce repression by police that has already killed eight people , Dozens injured and the whole country in a state of siege.

The day before, the Peruvian government declared a state of emergency for 30 days, while the organizers of the mobilization invited citizens to join the protests.

Popular anger is out of control in the Piura and Amazonas regions, and the road concessionaire has warned that highways under its responsibility are cut at four points. In the city of Huancavelica, the compound of the Regional Transport Directorate was set on fire and in Cusco, where the airport had already been seized, the Camicia natural gas plant, one of the largest deposits in South America, was captured. was.

A group of students took over the facilities of the Universidad Mayor de San Marcos in Lima on Wednesday night demanding justice for the youths killed in the Apurimac and Arequipa regions due to police repression and the dismissal of the Boluaarte government.

Since last week, areas of the population have continued peaceful demonstrations in areas such as Puno, Cusco, Tacna, Lima (the capital), Apurimac, Arequipa. They demand the closure of Congress, new elections, the resignation of President Dina Boluaarte and the independence of former President Pedro Castillo.

According to Telesur, on the issue of early elections, Congress will debate it this Thursday, although Dina Boluarte said first that they would be for 2024 and then for 2023.

Pedro Castillo asks the Inter-American Commission on Human Rights to intervene for his and his people’s rights and in the text he “makes judges and prosecutors responsible for everything that happens in the country. My compatriots Millions of thanks for the love and support. Only people save people,” Telesur quoted.

The former president’s request comes after Peru’s judiciary’s preliminary inquiry by the Supreme Court suspended hearings for requests for preventive detention for alleged crimes of insurrection, conspiracy, abuse of authority and serious disturbance of the public peace.

Mobilization in Peru began when Congress dismissed Pedro Castillo, after the former president announced the temporary dissolution of the unit, and Bolluarte was sworn in as president.