Three goalies hasn’t been a crowd for Gophers women 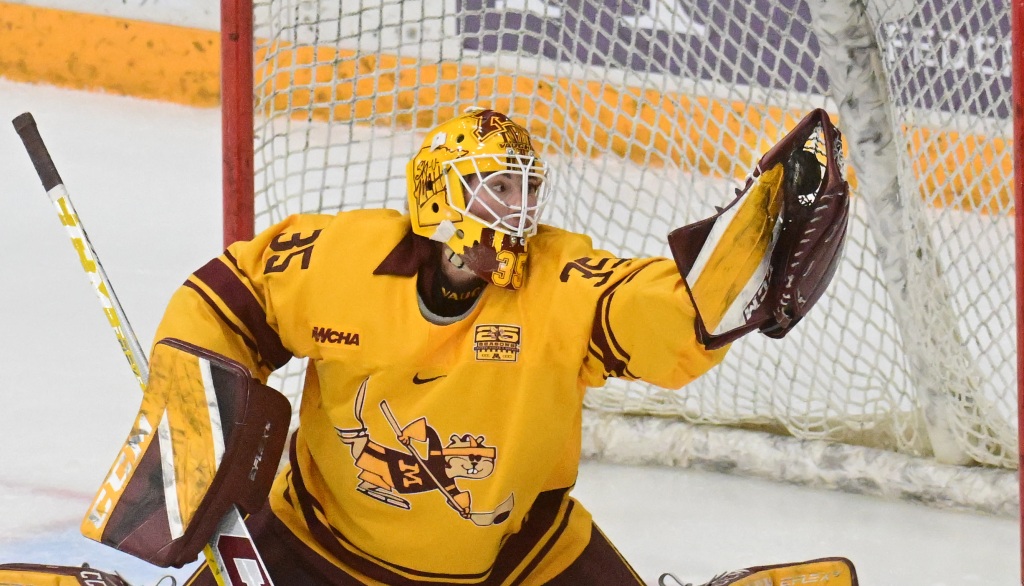 Hidden from view in what has been a wildly successful season for Gophers women’s hockey is a weekly task for coach Brad Frost. A chore, really. Picking his starting goaltenders.

“It’s one of the most stressful things for me every week,” he said.

For all involved, really.

Asked if part of what has made the top-ranked Gophers’ season so special is having three good goaltenders, senior goalie Lauren Bench said, “How would you like me to answer that?”

Goaltender is the only unsettled part of what has been a major rebound from a disappointing COVID season in 2020-21 — if it in fact really needs to be settled. In 2018-19, Alex Gulstene and Sydney Scobee traded nights in goal into the postseason and the Gophers advanced to the NCAA title game. Each played at least one game in the NCAA tournament.

Of course, that was two goaltenders; this is three.

“It would be easier to say, ‘We’re just going with this goaltender,’ but there’s good competition right now,” Frost said. “They’re all earning it.”

Bench, a super senior transfer from Bemidji State, has played in 15 games with a team-high 13 starts. She has a 2.35 goals-against average and .913 save percentage and victories over ranked teams from Wisconsin, Minnesota Duluth and Colgate.

Pahl, a junior from Rochester, has played 11 games with eight starts and wins over ranked Duluth, Colgate and Ohio State. Her 1.79 GAA and a .933 save percentage would be Top 20 if she had the requisite 500 minutes.

Vetter, a true freshman who played last season for the Lakeville boys team, is 5-2 with a 1.66 GAA and .927 GAA. Vetter hasn’t played since starting a 7-2 victory at Minnesota State on Jan. 14. She hopes she’ll play this weekend’s two-game series against Bemidji State.

“I don’t really think about it. I just show up to practice every day, play hard and do my thing until the time comes for him to tell us who’s starting,” said Pahl, who made 40 saves in a 2-1 victory over then-No. 1 Wisconsin on Jan. 21, then made 32 saves in a 5-3 victory over No. 2 Ohio State last Saturday. “Until then, I’m just doing my thing.

Hockey teams always want two interchangeable goaltenders. The biggest reason the Gophers have three right now is because of the NCAA eligibility waiver granted to athletes who played during the 2020-21 COVID season. Bench, who split time with Pahl last season, took the offer and is the most experienced of the Gophers netminders.

Her next start will be the 100th of her college career, something she would like to do against her old team this weekend. Had Bench not returned, Pahl would have been the veteran and Vetter would have slipped into a tandem.

At least Pahl can take a COVID season. Vetter won’t have that option.

“People understand that older goals is common in the NCAA. That’s understandable; that’s not an issue,” she said. “But my entire (high school graduating) class got the short end of the stick twice. They tell us, ‘So sorry about your senior year,’ then you’re kicked out of high school. Then you go to college and everyone else gets to come back. It’s the same situation all over the country.”

But Vetter is happy to be at Minnesota. She started schools visiting as a freshman in high school and essentially had her pick of colleges, yet she chose the Gophers and said she’s glad she did. Ditto for Bench and Pahl, whose occasional disappointments are assuaged by being part of bringing Gophers hockey back to prominence after the U missed the NCAA tournament in a COVID-shortened 2020-21 season.

“We’re one unit and we truly believe in everybody when anyone gets the opportunity to step out on the ice,” Bench said. “There’s no panic button; we know everyone is going to perform and do whatever they can for our team’s success.”

Expectations are high. After six more WCHA regular-season games, the Gophers start the conference playoffs on March 25. If they take care of business, they should host a first-round NCAA tournament game at Ridder Arena and can take aim at their first national title since 2016 .

“I definitely feel we have a shot at winning it all if we keep the momentum going and keep consistent,” Pahl siad. “This could be a year we come home with a championship.”

The top-ranked Gophers (20-7-1) have been starting three goaltenders this season:

Xbox Game Pass: Seven games revealed to arrive during the first half of August