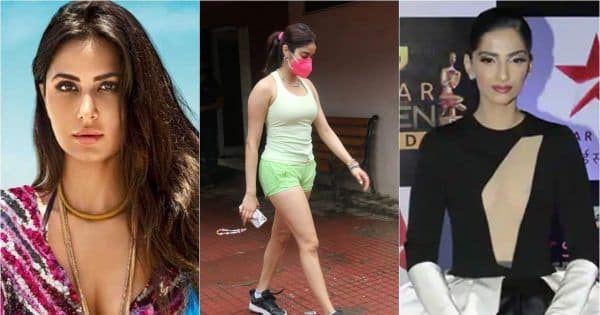 A few years back, Katrina Kaif made an appearance on a chat show hosted by Neha Dhupia and candidly admitted answering tough questions. In a question to Katrina, Neha asked, “Which celebrity goes OTT to her gym, and looks workout?” Though Katrina named Janhvi for not being over-the-top, she expressed her concern about the short shorts she wears to the gym and her statement created quite a stir on social media. Also Read – Trending Entertainment News Today: Rakul Preet Singh breaks silence on her marriage with Jackky Bhagnani; Anusha Dandekar shares an update about Farhan Akhtar-Shibani Dandekar’s wedding

“Not OTT, but I am worried about the very short shorts that Janhvi is wearing! She also comes to my gym, so we’re often together at the gym. I just worry about him sometimes,” Katrina had replied. His comment did not go down well with Janhvi’s cousin Sonam Kapoor, who jumped to her defense to shut down Katrina’s statements. Also Read – Move Over Cleavage And Underboob, Urfi Javed, Mouni Roy, Deepika Padukone And More Hotties Take The Sideboob Trend

The Veere Di Wedding actress, who is known for her bold statements, shared a picture from Janhvi’s outing praising her fashion choice and wrote, “She also wears regular clothes and rocks it.” While Kat’s comment left a lot of fans upset, Janhvi never reacted to it. Also Read – Salman Khan’s Tiger 3, Katrina Kaif’s Merry Christmas and more; Here’s an update on the shooting of Biggies amid the rise in Covid-19 cases

On the work front, Katrina, who was last seen in Akshay Kumar’s Sooryavanshi, is currently busy shooting for Salman Khan’s Tiger. The film also stars Emraan Hashmi as the main antagonist, who will reportedly play a Pakistani ISI agent, along with Ranvir Shorey, who was also seen in the first part of the franchise.

The shooting of the film will be done at multiple locations. It is produced under the banner of YRF. The budget of the film is estimated to be Rs 350 crore which makes it the costliest Bollywood film till date. Reportedly, Shah Rukh Khan will also play a special role in the film as Pathan, where we will see a crossover of the two Agent films.