Today the 22nd session is going on in Cuba. alba-tcp summit 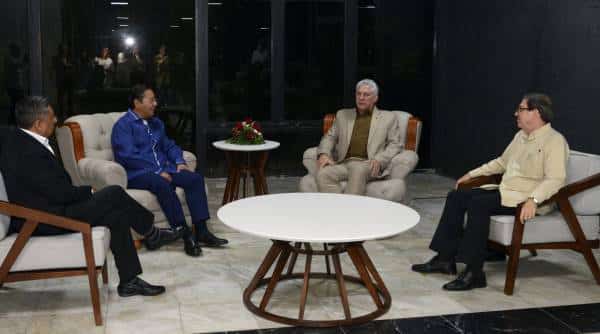 An extraordinary session of the National Assembly of the People’s Power of Cuba will celebrate 18 years of Latin American and Caribbean cooperation, solidarity and integration this December 14 among the countries of the Bolivarian Alliance for the Peoples of Our America-People’s Trade Treaty . (ALBA-TCP), and in this will reaffirm their unity in defending peace in our Americas, Cuban Foreign Minister Bruno Rodríguez Parrilla said in a tweet about the momentous event.

Following this parliamentary ceremony at the convention centre, delegations from the ten member states of the Agreement and Integration Mechanism will hold the 22nd. The heads of state and government will hold the ALBA-TCP summit, a venue where they will exchange views on progress and challenges for the benefit of nations, the Cuban foreign ministry indicated.

This alliance—founded by Fidel and Chávez—emphasizes solidarity, complementarity, justice, and cooperation.

Since Tuesday, Latin American and Caribbean leaders from the grouping’s member states have been arriving in Cuba, such as the president of the multinational state of Bolivia, Luis Arce Catacora, who held a meeting with his Cuban counterpart, Miguel Diaz-Canel Bermudez. , during the recess of the session of Parliament.

Alliance executive secretary Sacha Llorenti also arrived in Havana, who said on his Twitter account that everything was ready for the event. At the same time, he recounted the first meeting between commanders Hugo Chávez and Fidel Castro on December 13, 1994, and indicated that “ALBA began with that embrace.”

ALBA-TCP is a forum for the integration of countries in Latin America and the Caribbean, emphasizing solidarity, complementarity,
Justice and cooperation, whose historical objective is to unite the capabilities and strengths of the countries that integrate it, with a view to the necessary structural changes and arrangements of relations to achieve the integral development necessary for the continuity of our existence. And only the nation.

Among the achievements of ALBA-TCP in improving the quality of life of its people, since its creation, are the declarations of Venezuela, Antigua and Barbuda, Nicaragua and Bolivia as illiteracy-free zones. In addition there is Mission Milagro, which is designed to benefit low-income people who have never previously received medical attention for their eye conditions.

Similarly, the Latin American School of Medicine, with offices in Cuba and Venezuela, trains approximately 30,000 youth from Latin America, the Caribbean and Africa as comprehensive community physicians. And their solidarity has also been highlighted in the face of contingencies arising out of natural events such as the COVID-19 pandemic.

IRS to end use of facial recognition system to verify identity