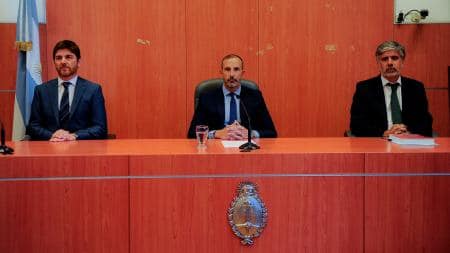 The Federal Oral Court 2 this Tuesday sentenced Vice President Cristina Fernández de Kirchner to 6 years in prison and lifelong special disqualification from holding public office for fraudulent administration to the detriment of the public administration with public functions in Santa Cruz.

In addition, the judges sentenced to 6 years in prison lazarus badge For fraudulent administration in the matter of Public Works at Santacruz.

In the case of former Public Works Secretary jose lopezTOF2’s punishment was six years’ imprisonment and permanent special disqualification from holding public office for the offense of fraudulent administration to the detriment of the public exchequer.

On the other hand, the court Vice President Cristina Fernández de Kirchner, Lázaro Báez, José López and Nelson Periotti were acquitted of the crime of illicit relationship with which they were charged In the trial of public works in Santa Cruz.

In the end, TOF 2 decided acquittal of Julio de Vido and other defendants pursuant to Article 530 of the Procedural Code of the NationUnder investigation by the Administration of Public Works in Santa Cruz.

After sentencing, the court ordered Seizures of just over 84 billion pesos Those convicted in public works trials are called “vialidads”, which are updated at the time the judgment becomes final.

The final hearing of the trial began at exactly 9:30 a.m. after the three judges entered the room, guarded by the police officers assigned to protect Comodoro Pai, and without making a statement to the press.

The only judge to reveal himself upon arriving at the building at the competent entrance by Latvia Street was Gorini, who, having consulted Radio Mater, considered only “The trial was done and ended.”

Villafane, former president of the General Administration of Provincial Roads of Santa Cruz, was last in the program It was his turn to speak for the final words and at the conclusion of the debate, something he did for 40 minutes via Zoom.

The former officer, who is now retired, demanded his acquittal and denied having committed any crime, saying that “if he had known that what we were doing was some form of illegality, he would have taken immediate action”. Be the first to do so that this does not happen”

Road Cause: The court will pronounce its verdict today at 5:30 pm.

Prosecutor Diego Luciani and Sergio Mola asked that the former president be sentenced to 12 years in prison As the alleged head of an illegal association and fraudulent administration.

For businessman Lázaro Baez, the prosecutor’s office claimed 12 years in prison as the alleged perpetrator of the alleged illegal association in his capacity as organizer and primary participant in the serious fraud administration.

Too, He requested ten years in prison for former planning minister Julio de Vido. and six years for former director of National Highways Nelson Periotti, and former officials of the organization Mauricio Colareda and Juan Villafañe.

Meanwhile, for Hector Daruich and Raul Pavesi, it took five years, and four years for Abel Fatala and José Santibanez.

For Carlos Kirchner, the two prosecutors sought his acquittal for illicit intercourse and a two-year suspended sentence for abuse of authority.

At the oral trial, the alleged diversion of 80 percent of national public road works in Santa Cruz in favor of the Bayes companies between 2003 and 2015 was discussed, as well as alleged overpricing and lack of control in the event of non-compliance. .

At an earlier hearing this week, the vice president exercised his right to speak in his final words before the judges, saying the court was a “Fire extinguisher Team” that he has a “written” sentence for “non-existent” facts for “tarnishing the political space” as part of a “disciplinary activity”.

decisions during these years

Trial for alleged address of Public works in Santa Cruz between 2003 and 2015 The trial, which began in May 2019 in the federal courts of Retiro in favor of the Bez companies, was interrupted for six months by the pandemic and resumed virtually in August 2020, never fully coming face to face.

for more than three and a half years, The tribunal heard 114 witnesses in 117 hearings. where a complaint filed by Javier Iguacel, former head of the National Highway in Macrismo, concerning irregularities in 51 public road works awarded to Bayes companies in Santa Cruz was discussed.

Witnesses included President Alberto Fernandez, Economy Minister Sergio Massa and all those who, like him, served as head of cabinet in the governments of Nestor and Cristina Kirchner.

Businessmen from the construction industry have also been involved in public works such as cousins ​​of former President Mauricio Macri, Angelo Calcaterra and Juan Chediac.

At the end of the testimonial phase, arguments began and One of the Financial Information Unit complaints did not allege While the Anti-Corruption Office stepped down from that role last June, it went on to explain that there was no crime.

The prosecution argued for nine daysTo which end it specified requests for conviction and forfeiture of over 5,300 million pesos in what it believed were economic damages”.

At the time of the decision, the judges will also have to decide whether to accept this request and secondly to examine whether the companies Peterson, Thiele, Asuco SA and Equimac used alleged “manoeuvres” to simulate competition in those tenders. which included the beige group.

In addition, andTOF2 must resolve the defense’s nullity propositions, including the use as evidence of messages obtained from the cell phone of former Secretary of Public Works José López in the framework of another case. open penalty against him.

In their arguments, the defense of all the defendants sought acquittal for the non-existence of a crime.

Shorthanded Warriors hold off Brooklyn Nets to wrap up homestand

NASCAR to hit the streets of Chicago with a downtown race