Trudy Rubin: Had a statement against Holocaust memorial massacre in Kyiv but ‘evil is back’ 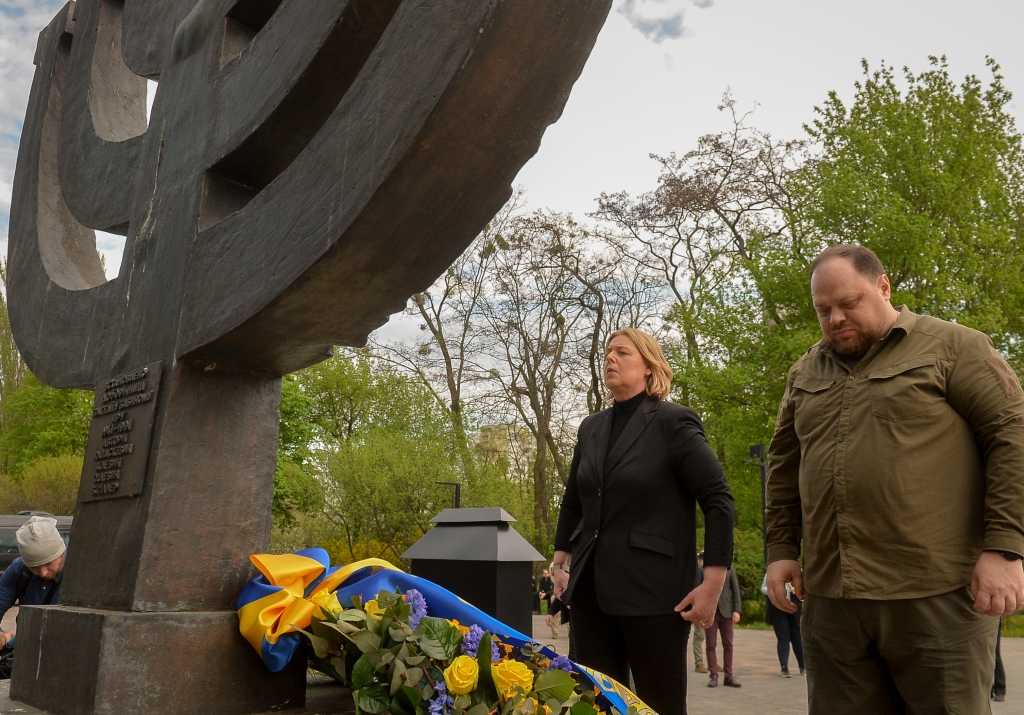 KYIV, Ukraine – Ukrainians refer to Vladimir Putin as “Putler”, an amalgamation of Putin and Adolf Hitler.

The label is more than just a mockery of Putin’s obscene lie that Russia invaded Ukraine to fight the Nazis – or a reaction to Russia’s relentless bombing of civilian targets. “Putler” describes a Russian assassin who is mocking Western leaders’ “never again” vows made after Hitler’s genocide against Jews and the slaughter of millions of other Europeans.

My visit to the shaking Babin Yar Holocaust Memorial in Kyiv, along with its former deputy CEO, Ruslan Kavtsyuk, is a reminder of why the word “putler” is perfectly fitting for this soulless man.

Kavatsyuk, 40, a former journalist and Catholic, has immersed himself in the largely forgotten history of Ukrainian Jews for the past three years.

Under gray skies in drizzling rain, we walk the path that is now a peaceful forest. We pass the sites where 34,000 Kyiv Jews were shot in the (now filled) ravine in two days in September 1941 – one of the largest such massacres in Eastern Europe. Another 64,000 or so Jews, Roma people, POWs and others later perished there.

The history of this tragedy was buried with its victims.

No monument to Babin Yar was erected when Ukraine was under Soviet rule. The Kremlin crushed any research into the subject, and made Babylon Yar an industrial dump site. Subsequent Ukrainian governments never started the project.

Few Ukrainians had heard of the massacre of Jews in 1941, until the memorial park was established in the previous two years. No list of the dead was ever compiled.

The goal of the memorial project was to research and bring the past to life so that a new generation can understand and avoid the recurrence of such evil.

“People didn’t understand before,” Kawatsyuk says, “that it could happen again here, now.”

Along our route, we pass a long wall made of coal from Ukraine’s Donbass region, which the Russians have ravaged since 2014. Quartz’s edge protrudes from the wall, which is enough for one to rest on one’s chin and meditate, eyes closed. Called the “Crystal Wall of Crying”, it commemorates the Babyn Yar dead. Yet it is equally relevant to Ukrainians in the Donbass, as Russians are still murdering as I write.

We walk down a stone walkway to Mirror Field, one of several establishments along the marked route. 10 mirrored pillars stand on a high circular platform, which twinkle in the sporadic sunlight; They are shot with 100,000 bullet holes, each representing one of the dead Babin Yar.

In the background, a recorded female voice softly reads the names of those who were lost against the low sound of a hidden acoustic organ. The effect is surprisingly soothing and laxative.

Before the present war, young people would come at night, meditating while sitting quietly on the stage. Kawatsuke told me, “We thought that if we uncovered the truth and people would come and show mercy to all the victims, it would be a universal place that would stand against evil.” “Then evil returned.”

A week after the attack, a Russian missile struck a TV tower near the Holocaust memorial site and destroyed one of its buildings, killing several civilians.

A Russian agent was captured by security guards as he indicated the coordinates for the missile attack – while standing on the circular platform of Mirror Field. I wonder if he had any idea of ​​the history under his feet.

“What’s the point of saying ‘never again’ for 80 years, if the world keeps silent when the bombs fall on the same site in Babin Yar? … History repeating,” tweeted Ukrainian President Volodymyr Zelensky. But it was.

For many Europeans and many Americans, the “never again” mantra has lost its historical power.

For Kawatsuke, the impact of the invasion was very personal. Just before the Russian attack, he was visiting Israel’s Yad Vashem Holocaust Remembrance Center in Jerusalem to consult on the opening of the first museum at the Babin Yar site. (The opening was canceled due to the war.)

He fled home from Israel the day before the Russians crossed the border to rescue his family. His home at Hostomel near Kyiv was completely destroyed by Russian shelling; He believes he would have been killed if the Russians had captured him. He quit his museum job in April to volunteer to help Ukrainian soldiers.

Nearly 80 years after Hitler’s defeat, Putin is committing another genocide in Ukraine, which haunts him.

Kavatsyuk emphasized that Ukrainians “are not in the same position as Jews were. This is not the Holocaust where millions and millions of people were killed.”

But “it’s a genocide,” he insists. “We are being killed especially because we are Ukrainians. Putin insists that there is no such thing as Ukrainians, only Russian people who are being fooled by the West.

Putin and his ministers reject the idea of ​​Ukrainian nationality or language. In the territory the Russians occupy, they have forcibly deported at least 1.2 million Ukrainians to Russia. Those who refuse to believe that they are Russians, not Ukrainians, are being arrested, tortured or killed.

“They want to destroy us all,” says Kawatsuke, his voice rising. “Something terrible will happen when we free the occupied territories.” He is asking scholars who have researched the fate of Ukrainian Jews to research the names of those lying in mass graves in Mariupol and other Russian-occupied cities and towns.

“If we don’t stop the Russians here,” he says, “Moldova will be occupied today, the Baltics in five years and Poland in 10 years. The Russians will keep going until they are stopped.”

As we walk the stone path from Monument Park – to the muted sound of cantorial prayers for the fallen – I wonder whether Western leaders have fully grasped the essence of Putler, a man who lived in Ukraine. K’s “disclaimer” while he himself imitates Nazi crimes.

I have a suggestion for leaders who still don’t understand why Ukraine should be helped to defeat Putler: sentence them for hours to hear the names of the dead that are in the Mirror Field near Babyn Yar. Flow endlessly across the platform.

Trudy Rubin The Philadelphia Inquirer, PO Box 8263, Philadelphia, Pa. 19101 or by email at trubin@phillynews.com is a columnist and editorial-board member.