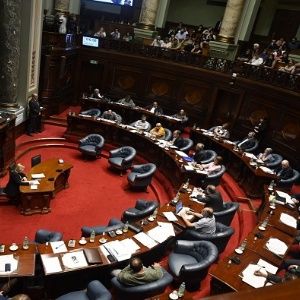 The parties of the ruling coalition in Uruguay seek a common ground this Monday before presenting it to the plenary session of that country’s Senate, with serious opposition from the Broad Front (FA) bench on the pension reform bill.

According to local media reports, legislators will meet with Rodolfo Saldén, the leader in the drafting of the text, whose current version has the single union central, the PIT-CNT, as a slanderer.

Among the government coalitions, the Cabildo Aberto (CA) party claims to have the greatest potential for amendment of the current proposal.

CA’s representative in the Special Commission to Propose Reform, Senator Raúl Lozano, declared that the executive had not taken into account some of the proposed changes.

Lozano announced that his organization maintains its positions on various issues and will push for them, even if it changes the government’s plan to obtain final approval of the new law.

“We’re in no rush,” Lozano assured his aides.

• Down with the IMF pension reform
• For the workers’ congress
• Let’s prepare for a general strike pic.twitter.com/ufQpGG7PFC


Last Friday, Saldén met with the Ministers of Economy and Finance, Azucena Arbeleche, the Minister of Labor and Social Security, Pablo Miraes, and the head of the Planning and Budget Office, Isaac Alfi, to examine the rationale for the project.

Broad Front has announced that it is waiting for the final text to present its criteria to the Senate of the Republic.