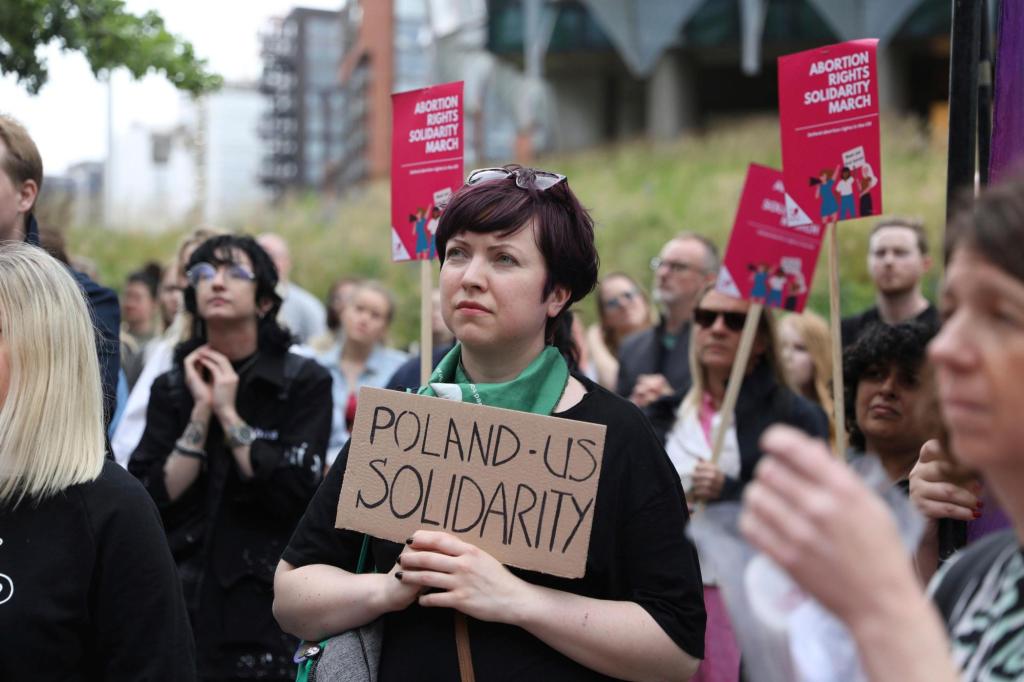 NAIROBI, Kenya ( Associated Press) — The lifting of constitutional protections for abortion in the United States on Friday galvanized anti-abortion advocates around the world, as abortion rights advocates fear it could jeopardize recent moves towards legalization in their countries.

The U.S. Supreme Court’s overturning of the landmark Roe v. Wade decision “shows that these types of rights are always at risk of being violated,” said Ruth Zurbriggen, an Argentine activist and member of the Companion Network of Latin America and the Caribbean, a pro-abortion rights group. .

“I believe that through this ruling, it will be possible to abolish abortion in the United States and around the world,” said Larin, president of Fundación Vida SV.

In Kenya, Fonsina Archane watched the news of Friday’s decision and said she was in a state of panic for a while.

“It’s being done in America, which should be an example when it comes to the women’s rights movement,” said Archaine, an abortion rights activist. “If this is happening in America, what about me here in Africa? It’s a very, very sad day.”

She fears the decision will cheer up anti-abortion campaigners across Africa who have attacked or threatened reproductive health clinics. “There is no safe place on the continent,” she said.

Abortion in sub-Saharan Africa is already more unsafe than in any other region of the world, and the vast majority of women of childbearing age live in countries where abortion laws are severely or moderately restricted, according to the Guttmacher Institute, a New York-based research organization that supports the right to abortion.

Archane said civil society groups in Africa will have to come together to come up with strategies to keep themselves and women safe. Just a few months ago, many saw hope when the World Health Organization released guidance on quality abortion, she said. “We were one step ahead, and now we have to take five steps back again.”

The decision, which leaves lawmakers in a single U.S. state the power to decide whether to allow or ban abortion, sparked a social media firestorm across Argentina, where a law legalizing selective abortion before the 14th week of pregnancy went into effect in January 2021. some years. debate.

Anti-abortion activists welcomed the decision, with legislator Amalia Granata tweeting: “There is justice in the world again. We are going to achieve this in Argentina too!”

Larin warned that in more conservative countries such as El Salvador, where abortion is illegal under all circumstances and where about 180 women with emergency obstetric care have been prosecuted over the past two decades, Larin warned that the decision could inspire new efforts to loosening restrictions on abortion outside the United States. US

“Abortion campaigns in our countries may intensify because funding and abortion clinics in the United States will close, as has happened in recent years,” she said.

In the Vatican, the head of the Pontifical Academy for Life, Archbishop Vincenzo Paglia, joined the American bishops in saying it is time for reflection, healing and civil dialogue.

“The fact that a large country with a long democratic tradition has changed its position on this issue also challenges the whole world.” the academy said.

In Mexico, lawyer and activist Veronica Cruz said the decision could give a boost to anti-abortion groups, but added that it would likely have no impact in Mexico, where 10 of the country’s 32 states recently legalized abortions before 12 weeks. pregnancy. years.

She noted that this decision could lead to an increase in the number of requests for help from US women who want to have an abortion. This year, local activists helped about 1,500 women in the US get abortion pills, Cruz said.

Ricardo Cano of the anti-abortion group National Front for Life also doubts that the decision will have any impact on Mexico or other Latin American countries, given the advancement of leftist ideologies in the region.

Colombia, which in February became the latest Latin American country to expand access to abortion, will also not be affected by the ruling, said Catalina Martínez Coral, director of Latin America and the Caribbean for the Center for Reproductive Rights.

Ahead of US President Joe Biden’s trip abroad, the heads of at least two members of the G-7 called the decision “appalling.”

“No government, politician or man should tell a woman what she can and cannot do with her body,” Canadian Prime Minister Justin Trudeau said, adding that he “cannot imagine the fear and anger” that women in the US should experience this. after the ruling.

The French Foreign Ministry called on the US federal authorities to “do everything possible” to ensure that women have continued access to abortions, calling it a “health and survival issue.” French President Emmanuel Macron added in a tweet that “abortion is the fundamental right of all women.”

New Zealand Prime Minister Jacinda Ardern said: “Watching women lose their basic right to make decisions about their bodies is incredibly saddening. Here in New Zealand, we recently passed legislation to decriminalize abortion and treat it as a health issue rather than a criminal one.

Tedros Adhanom Ghebreyesus, head of the World Health Organization, said on Twitter that he was “concerned and disappointed” by the decision. saying it reduces both “women’s rights and access to health care.”

Whether or not abortions are legal, the UN sexual and reproductive health agency said, “it happens all too often” and global data shows that restricting access makes abortion more deadly.

The UN Population Fund issued a statement following the Supreme Court’s decision, noting that its 2022 report states that nearly half of all pregnancies worldwide are unplanned and more than 60% of those pregnancies are at risk of ending in abortion.

“A staggering 45% of all abortions worldwide are unsafe, making them the leading cause of maternal death,” the agency said in a statement.

In the only part of Latin America directly affected by the ruling, Puerto Rico, the island’s Senate on Tuesday approved a bill that would ban abortions after 22 weeks or when a doctor determines the fetus is viable, with the sole exception if the woman’s life is in danger. The bill is now before the island’s House of Representatives.

“It causes a lot of uncertainty given the environment in Puerto Rico right now,” she said. “This bill hurts poor women and black women the most. … They don’t have access to services like other social groups.”

If the technology can not be accessed, it is copied: Russia approves of ignoring copyright in light of sanctions