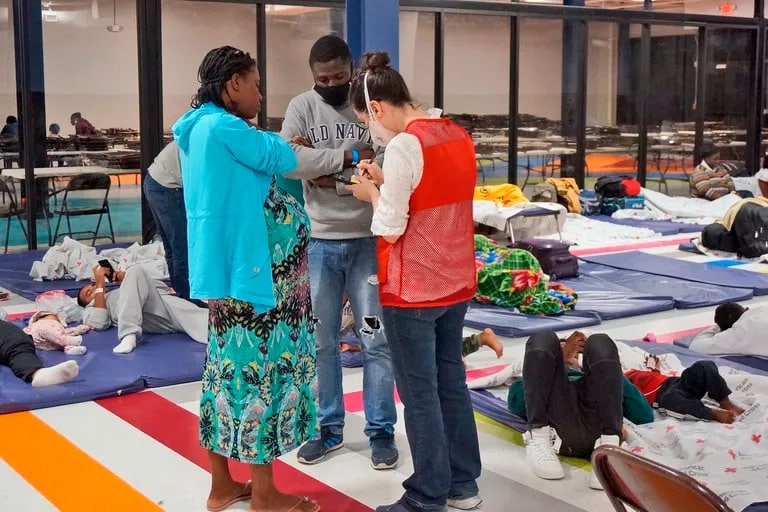 According to court documents filed by the Justice Department, Border Patrol agents recorded 143,903 apprehensions of migrants along the border with Mexico in November, down 30 percent from 204,273 in October. This was the lowest level since February 2021, the first full month of Biden’s presidency.

The document, filed as part of the federal lawsuit process in Louisiana, offered no explanation for the decline, which came before enforcement of the public health rule known as Title 42 expires Wednesday. .

Nicaraguans became the second largest nationality on the border after Mexicans. The number of migrants from Venezuela and elsewhere has decreased greatly.

Republican-governed states have asked a federal appeals court to keep Title 42 in effect. The decision can be taken at the last moment.

Border cities, especially El Paso in Texas, face a daily influx of migrants that the Biden administration hopes will increase if the ban on asylum is lifted. Since March 2020, the United States has denied asylum to migrants 2.5 million times on grounds of preventing the spread of COVID-19.

In Tijuana, Mexico’s largest border city, there are an estimated 5,000 people in more than 30 shelters, Enrique Lucero, the city’s director of immigration affairs, said this week.

In Reynosa, Mexico, near McAllen, Texas, about 300 migrants—mostly families—crawl into Casa del Migrante, sleeping in bunk beds and even on the floor.

Rose, 32, from Haiti, has been at the shelter for three weeks with her daughter and 1-year-old son. Rose, who did not give her last name because she feared it could jeopardize her safety and efforts to apply for asylum, said she learned about possible changes in US policy on her trip. She said she was happy to wait a little longer for restrictions on Mexico that were imposed early in the pandemic and have been a cornerstone of US border surveillance to be lifted.

“We are very scared, because Haitians are being deported,” said Rose, who is worried that any mistake in trying to bring her family to the United States could send her back to Haiti.

In Reynosa, some 3,000 migrants live in tents set up on concrete slabs and rough gravel inside the walls of Senda de Vida 2, a shelter opened by an evangelical Christian pastor when the former reached maximum capacity. Flies are buzzing everywhere under the scorching sun even in the middle of December.

For many fleeing violence from Haiti, Venezuela, Central America and elsewhere, these refuges provide at least some protection from the cartels that control the course of the Rio Grande (or Rio Grande) and prey on migrants. .

In McAllen, a hundred migrants escaping asylum restrictions rested on mats on Thursday in a large room run by Catholic Charities where their families and friends live inside the United States.

Title 42, which is part of the Public Health Law of 1944, applies to all nationalities, but falls more heavily on those whom Mexico agrees to repatriate: Guatemalans, Hondurans, Salvadorans and, more recently, Venezuelans. Except Mexican.

Border Patrol agents carried out 3,513 apprehensions of Venezuelans in November compared to 22,044 the previous month, demonstrating the effect of Mexico’s decision on October 12 to receive migrants from the South American country who have been expelled by the United States. was given.

In a related development, a federal judge in Amarillo, Texas, ruled that the Biden administration wrongfully ended a Trump-era policy that kept asylum seekers waiting in Mexico for a US immigration court hearing. The ruling did not have an immediate impact, but it could deal a long-term blow to the White House.

The “remain in Mexico” policy, after it was introduced in January 2019, was used to force approximately 70,000 asylum seekers to wait in Mexico for their US hearings. Administrative Road.

The Department of Homeland Security said it is evaluating its next steps. Texas Gov. Greg Abbott, who filed a lawsuit to uphold the “Remain in Mexico” policy, called the ruling a victory “for now”.

Kacsmaryk initially ordered the policy to be reinstated in 2021. The Biden administration complied, but did not widely implement the policy, and only a few thousand were returned to wait in Mexico.

A blackface ‘Othello’ shocks, and a professor retreats from class