US scientists find traces of an ancient giant ocean on Mars 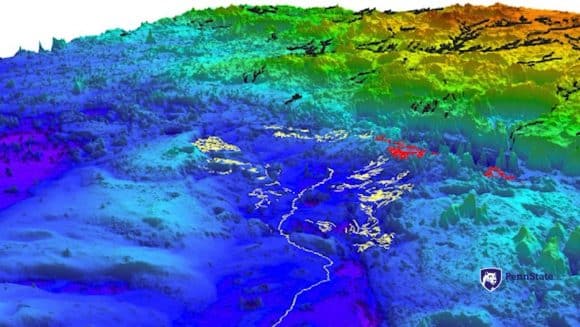 Scientists in the United States found evidence of a vast ocean of hundreds of thousands of square kilometers, which existed on the surface of Mars about 3.5 billion years ago,

The beach’s distinctive topography, identified through several satellite images of the Martian surface taken at slightly different angles, allowed them to produce a relief map that showed that there were River peak over 6,500 km They reported last Thursday with the presence of a river delta or channel belt carved into the ocean floor.

Using data from the Mars Reconnaissance Orbiter collected in 2007, the team applied analysis of ridge thickness, angles and locations. Study the topographic depression known as the Aeolis Dorsa region north of the Red PlanetIn which there is the densest collection of river banks on Mars.

The researchers found a substantial rise in sea level and rapid movement of rocks by rivers and ocean currents in that area, with substantial sedimentary accumulations at least 900 meters thick, covering hundreds of thousands of square kilometers.

“On Earth, we trace the history of waterways by looking at sediment that accumulates over time. We call it Stratigraphy, the idea that water consists of sediment with which changes in the Earth can be measured by understanding how they accumulate, That’s what we’ve done here, but it’s Mars”, commented Pennsylvania State University geologist Benjamin Cardenas.

“Here one of the most important points that immediately comes to mind is that Existence of an ocean of this size means more potential for lifeCardenas insisted.

“It also tells us about ancient climate and its evolution. Based on these findings, we know that there must have been a time when the planet was warm enough and its atmosphere was at one time large enough to support that much liquid water.” was.”

“One of the main goals of the Mars Curiosity rover mission is to search for signs of life,” Cardenas said. “It has always been looking for water, traces of habitable life. This is the biggest ever. It is a massive body of water, fed by sediments coming from the highlands, possibly carrying nutrients. If there were tides on ancient Mars, they would be here, slowly bringing water in and out. This Is the Exactly the Kind of Place Where Ancient Martian Life Could Have Evolved,

The results of this study have recently been published in the Journal of Geophysical Research: Planets. “The most important and innovative thing we did in this article was to think about Mars as its stratigraphy and its sedimentary record,” Cardenas said.