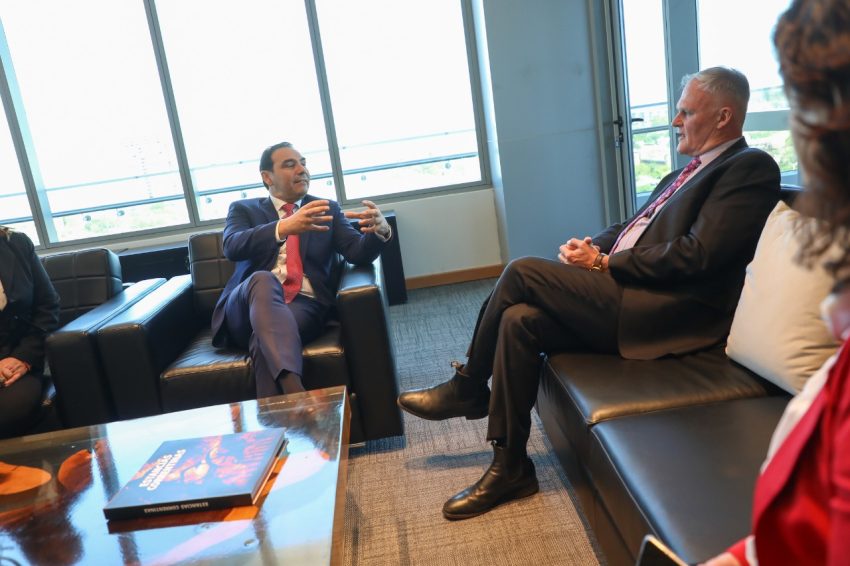 Governor Gustavo Valdés received in his office this morning Brett Hackett, Australian Ambassador to Argentina, with whom he discussed Corrientes’ productive and industrial activities and the prospects of working together in the future. “The province is integrated into the world to develop its full potential,” the president said on his Twitter account.

“It was a very successful meeting, we talked about the rapid growth of Australian investment in the province, which strengthens ties,” the ambassador said after the meeting.

“We talked about setting up different areas of training, such as in English, or about handling firefighting, also about tourism and opportunities to work more together,” he said.

On this occasion, Hackett held a meeting with the Secretaries of Industrial Forest Development, Luis Maria Mestres, and Agriculture and Livestock, Norberto Mortola, where he showed them the various production chains in the province, such as yerba mate, citrus, livestock, rice, Afforestation, among others.

“This is my second visit to Corrientes, the first was at Mercedes, where Australia has invested in rice,” said the Australian official, who concluded: “I now understand that the province has more opportunities in the agricultural industry and it is leading is in the production of weed, which is a product that has entered the Australian market. I believe there will be more areas of cooperation in the future.”