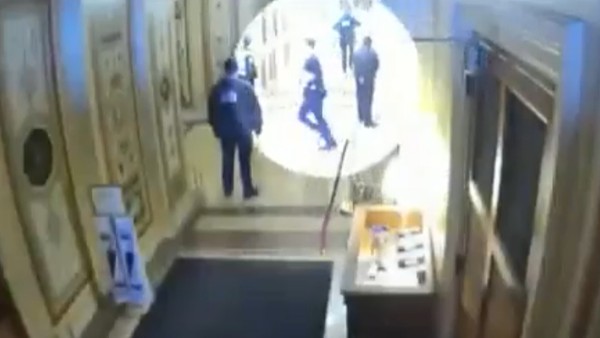 There’s video of Missouri Senator Josh Hawley fleeing a riot in the Capitol and it began tonight at a Jan. 6 hearing.

Holly became a symbol of the riots at the Capitol on January 6, when he was captured in a photo raising his fist as a sign of support for the rioters. He loves his picture so much that he’s still using it on his business, even though he doesn’t own the copyrighted image.

He must think that this one picture of him raising his crooked arm makes him look brave and strong but tonight the whole world finds out he is a tough guy but as we saw him running away from the scene on the video saw.

Representative Ellen Luria (D-Va) begins the video by talking about Hawley’s famous fist photo and how it was taken as rioters already gathered at the security gate.

“Later that day, Senator Hawley ran after protesters who helped attack the Capitol,” said Rep. Luria, “see for yourself.”

Then he played the clip.

And then it somehow got worse for Lil’ Joshi.

Not only did the whole world see him running like a Wiley E. Coyote, with his tail between his legs, they all couldn’t help but laugh at him.

Watch this clip of everyone laughing at the inside clip of the hearing:

Immediate response to the vid: pic.twitter.com/XAv4jc2tjr

Maybe he wanted to run?

Yes, that’s what it should be.

After freeway shooting, off-duty cop honored for trying to save 6-year-old Aiden Leos