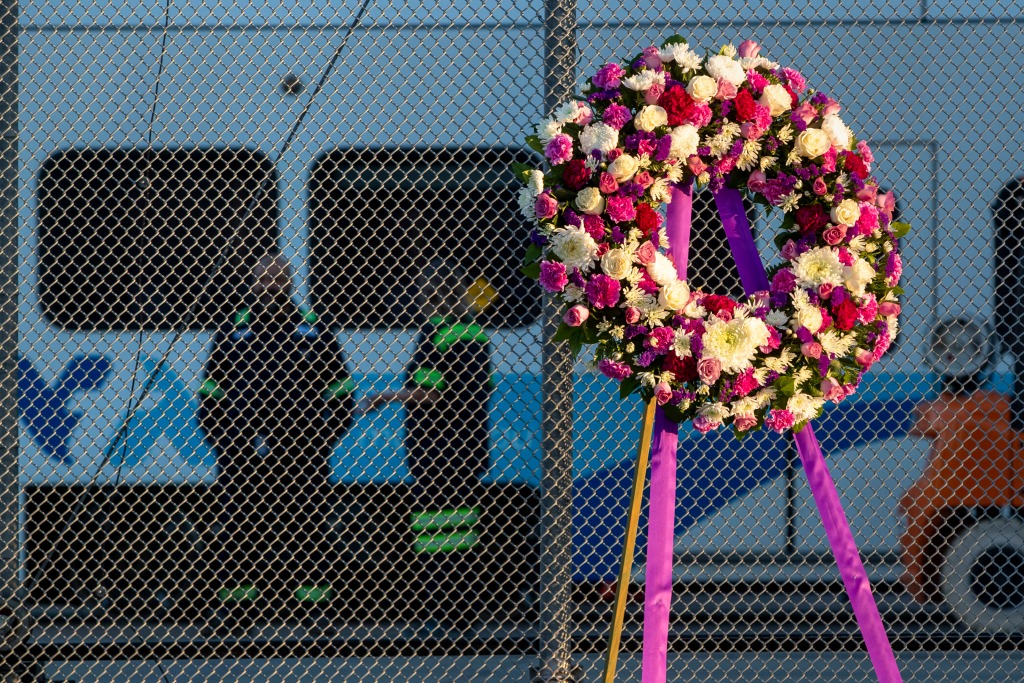 A newly obtained sheriff’s report indicates that a South Bay bus driver promised last month that there would be “some shootings” if he was fired for failing to comply with the Valley Transportation Authority’s vaccination mandate.

“If I get fired today, you’ll see me on the news,” the driver, Douglas Lofstrom, told a co-worker, according to an investigative report on the June 17 incident. Lofstrom was arrested shortly after the alleged threats were made, but police did not provide a motive at the time.

Lofstrom’s conduct, and its aftermath, have become a point of contention at the transit agency, where a senior union official blamed agency management for putting pressure on Lofstrom through the vaccination mandate, and other employees they are now expressing outrage that neither the union nor the agency is cracking down on violent threats at a workplace subject to a horrific mass shooting just over a year ago.

“We were all warned there was going to be zero tolerance after the mass shooting,” said Lavon Gray, a 27-year veteran of the transit agency. “If they can’t fire this guy, what’s going to stop the next guy?”

For his part, Lofstrom denies the accusations of threats in a request for donations on GoFundMe. But he acknowledges that he made “comments” about the bus dispatch system hours before a disciplinary meeting with VTA management about the vaccine mandate. Lofstrom also claimed on the GoFundMe page that he was vaccinated two days before the meeting to avoid being fired.

Lofstrom, a 23-year-old VTA employee, faces an upcoming disciplinary hearing that will determine his future with VTA. The VTA did not say whether it will fire Lofstrom. VTA general manager Carolyn Gonot called the threats of violence “unacceptable” and said the agency will make a decision about her employment after “following the required administrative procedure.”

The sheriff’s report says two clerks, neither of whom are identified by name, told deputies about the threats.

Lofstrom’s alleged behavior comes as the nation is reeling from a series of mass shootings and as lawmakers debate how best to crack down on gun violence. Last year, VTA employee Samuel Cassidy went on a shooting rampage in May 2021, killing nine co-workers. The massacre has sparked multiple lawsuits in which surviving family workers argue that the transit agency ignored a number of red flags to avoid the shooting, including concerns that Cassidy might “go crazy” after reprimanding a co-worker. .

The same day Lofstrom threatened his colleagues, records show the sheriff’s department served him with a gun violence restraining order. One of the state’s main tools in trying to prevent gun violence, a GVRO allows authorities to seize weapons and prohibit someone who has made threats from obtaining a weapon.

However, records show no weapons were seized at his Scotts Valley home near Santa Cruz. As part of the order, Lofstrom is not allowed to possess any weapons or ammunition. At a July 7 hearing, a judge ruled that the restraining order should be extended through mid-September.

Lofstrom pleaded not guilty June 21 to a misdemeanor felony threat with intent to terrorize charge and was ordered to wear a GPS-enabled ankle bracelet and attend psychological counseling while his case goes to court. A hearing on the misdemeanor charge is scheduled for August 29.

Reached by phone Monday, Lofstrom declined to comment and an attorney did not respond to a request for comment.

Without detailing the nature of the alleged threats, VTA union president John Courtney claimed shortly after the incident that “undue pressure” from the VTA administration’s vaccine mandate prompted Lofstrom’s threats.

In an interview Monday, Courtney initially said she is “fighting” for Lofstrom, but later asked that her comments be corrected.

“What I am saying is that every citizen of this country is entitled to due process,” said Courtney, who was previously criticized for defending Cassidy in disagreements with the administration before her shooting.

At the time of the alleged threat, about 50 VTA employees, including Lofstrom, were facing possible termination for refusing to be vaccinated against the COVID-19 virus by April 29. VTA, which was the last major transit operator in the Bay Area to enforce a vaccine mandate, has used the threat of layoffs to push vaccines similar to BART and Muni. However, some agencies, including Caltrain and Los Angeles Metro, the state’s largest transit agency, have allowed testing options for unvaccinated workers to avoid layoffs.

Gray, a longtime transit dispatcher, said she’s also upset that VTA has yet to follow through on firing Lofstrom or any other unvaccinated employees.

“People have retired (because of the mandate), and now this guy goes and makes a threat, saying, ‘Fire me and I’m going to shoot the place down,’” Gray said. “John Courtney walks in and says, ‘Well, you guys did that to him,’ and (VTA management) takes it.”

Overall, suicide rates fell in the US last year, but not for everyone