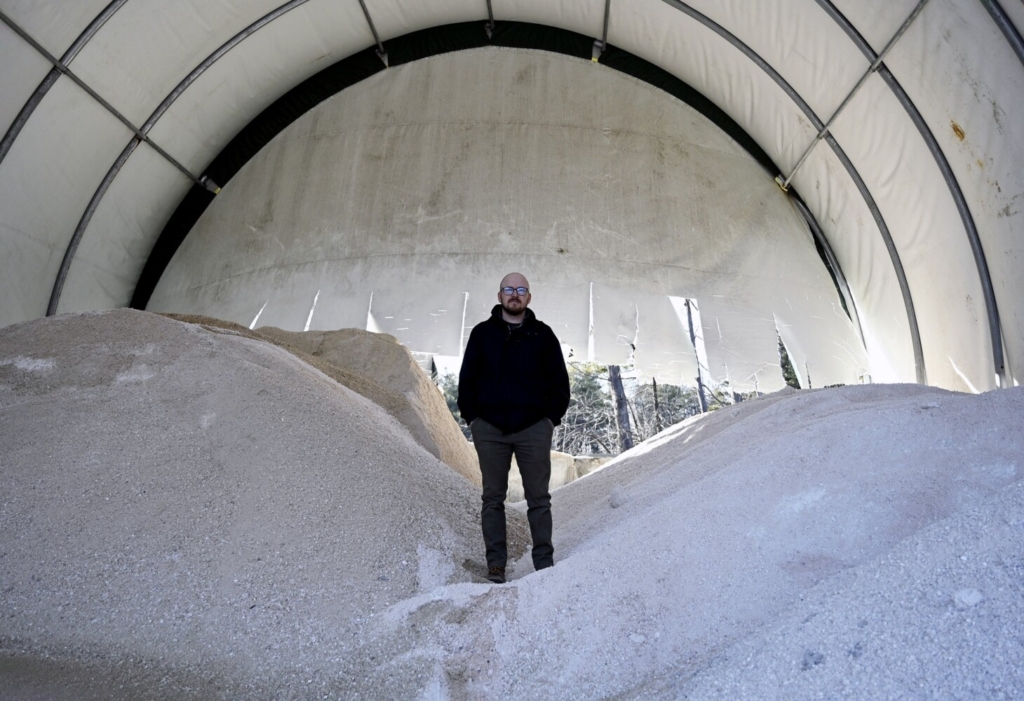 Mainers is no stranger to the road hazards of winter. Bad weather brings dangerous driving conditions. Rock salt eats away at the chassis and metal infrastructure. The thaws of spring bring heaps and pits of frost.

For generations, those headaches were at least fairly predictable. But as global climate change warms the state’s winters, erratic, severe weather will mean more damaging craters and water pollution from overly salty waters to keep up with more frequent snow storms. In the last full week of February, temperatures in Portland fell far below zero and hit a record high of more than 60 degrees. Temperatures crashed again shortly thereafter, and a blizzard hit southern Maine that weekend.

“We should be careful in ascribing weather events to climate change in any given season, but the overall trend is clear over several decades,” he said. “Winters have become quite warm. With these more extreme weather patterns it is in line with the changing climate overall that we are seeing more winters like this.”

Freeze-thaw cycles combined with excess rainfall can lead to spring-like conditions in the middle of winter, causing seasonally early damage to Main Streets by potholes and frost heaving.

“We’re seeing more fluctuations in temperature above and below freezing—it just keeps bouncing around,” said Brian Byrne, a highway maintenance engineer in the Maine Department of Transportation. “I can absolutely say that those kinds of temperature fluctuations, combined with rain that saturates the soil and refreezes it, is more damaging to the road.” A car drives through a pothole on Forest Avenue in Portland on February 22. Sean Patrick Ouellet / Staff Photographer

The extent to which warming trends are damaging main roadways is not clear. Limited research has been conducted, but preliminary results from a recent study by the Minnesota Department of Transportation found no evidence of more frequent freeze-thaw events in that state.

Sarah Nelson, director of research at the Appalachian Mountain Club, said New England has lost three weeks of winter over the past century, and “mud” days have increased by a few weeks per year. Winter isn’t just warm, it’s prone to extreme highs and lows, part of a trend called “winter weather whiplash” by Nelson, a research group.

“It’s not that winters are getting shorter and we’re losing snow cover, but there’s a sense of a lot of variability,” Nelson said. “Increasing variability in weather is one of the signs of climate change. It is unpredictable conditions at the wrong time of year that can cause such impacts (for roads and infrastructure).”

The changing winter weather means more snow, sleet and freezing rain in southern Maine, and more water pollution from extra tons of rock salt dumped on roads, driveways and parking lots. Salt is an effective Dicer and is widely used throughout the country. It is also toxic to freshwater ecosystems and is a dangerous pollutant in drinking water sources.

“This has been an issue that’s been on our radar for more than a decade,” said Wendy Garland, director of environmental assessment in the Maine Department of Environmental Protection. “We are seeing that our streams and water are becoming saltier over time.” In 2020, Maine ordered 535,000 tons of rock salt—780 pounds—for each person in the state, estimated in an unpublished MenDOT study. Salt spilled on pavement or unsealed stored salt eventually seeps into waterways and groundwater. Chloride from salt deposits can remain underground for years, slowly leaking into nearby waterways, especially in summer when groundwater, not runoff, feeds flowing streams.

In small urban waterways near heavily salted areas, dragonflies, mayflies, stoneflies and other important organisms cannot survive because the water is too salty, a problem that causes a chain reaction throughout the environment.

“It is the basis of the food chain and the source of food for fish. It is representative of the health of the ecosystem,” Garland said. “If sensitive organisms cannot live in the stream because of the toxic levels of chloride, it will ruin the entire ecosystem.”

Drinking water is also at risk due to salt contamination. The scale of the problem is unclear, but Menadot estimates that it replaces 15 private wells per year damaged by the state’s road runoff. Salty water can increase high blood pressure, which increases the chances of heart attack and stroke, along with other health effects.

Chloride-infested water also corrodes water lines and equipment and can activate toxic heavy metals such as lead, mercury and cadmium in soil and water pipes. Chloride pollution is so harmful because it is nearly impossible to stop runoff into local waterways, and once it is in the environment it cannot be removed.

“We need our roads to be safe in winter, but unlike some other types of pollutants, there is no strategy to remove salt from runoff,” Garland said. “We could use less of it – it’s a really worrying issue.” A car passes through a large pothole on Somerset Street in Portland. Research is underway to assess the effect of Maine winter warming on road damage. Derek Davis / Staff Photographer

negligible use of salt

Instead of reducing salt use, Maine may be on track to spread even more. Over the past 15 years, the amount of road salt used each year by MainDOT has increased by an average of about 40 percent, with significant annual variations.

Increased expectations of drivers for safe roads in all seasons have encouraged the use of more salt, but so has a changing climate and an increased frequency of messy, slippery winter storms. In a large snowstorm, road workers use relatively little salt because they can plow light, dry snow instead. Byrne said mixed precipitation events – storms combining rain, snow, sleet and snow – are now more common, especially in densely populated southern Maine. During that mess if you want to keep the roads open, he said, salt is the only option.

“We think winter brings more snow storms,[and]it affects how we treat roads,” Byrne said. “You can take two feet of a nor’easter and it’s a lot easier to drive on that dry ice. Just more snow events affect us dramatically. As we’ve seen a warming trend and more icing in recent years, We have seen a similar increase in the use of salt.”

Snow and rain have become more common with near-freezing temperatures in southern Maine over the past 30 years, according to unpublished research for the Department of Transportation by Shaleen Jain, chair of the Department of Civil and Environmental Engineering at the University of Maine.

It will take more research into hourly temperature and precipitation data to determine how storms combine snow, rain, freezing rain and hail, but the trend is clear, he said.

Jain’s research is part of an upcoming report for MainDOT that could give local and state policymakers a blueprint for future winter maintenance. The state transport department, which has adopted technology and practices to limit the use of salt, looks after only about 20 per cent of the roads. Roughly 80 percent are under the purview of local governments, with various salting practices, equipment requirements, and budgets.

“It’s one of those challenging sustainability dilemmas,” Jain said. “Salt access allows for seamless access to roads for our economy and communities and increases our mobility. At the same time, salts move into our streams and groundwater.” Seabreeze Property Services CEO Josh Flynn stands near some road equipment from his Portland company in November. Flynn says that increased consumer expectations for safe roads and other paved surfaces have contributed to the rise in salt use. Gregory Rick / Staff Photographer

Josh Flynn also thinks something is changing. The owner of Seabreeze Property Services, one of the largest plowing contractors in Maine, said his salt use has increased in recent years, partly driven by more frequent snow events, but also by the driving conditions of the customer. want.

“Expectations have changed like the weather,” Flynn said. “Whether it’s a slip and fall lawsuit or the idea that people forgot it snowed in Maine, our use of salt has gone up because people want clear and black pavement in the middle of a storm.”

Without addressing the continuing threat of lawsuits if someone slips into an icy strip mall parking lot, or the perception that the sidewalk isn’t safe unless it’s coated with visible salt crystals, the amount of brine will continue to increase because Maine gets more and more mixed storms, Flynn said.

“As the weather keeps changing and tends to snow, it’s going to be more and more difficult,” he said. “I know people are going to start seeing something different, but it’s going to be a tough conversation.” A large crater at the intersection of Congress Street and Franklin Street in Portland exposes the underlying cobblestones. Ben McCanna/Staff Photographer

Maine currently has no statewide salt reduction strategy. New Hampshire, on the other hand, has worked on this issue for almost a decade. Despite the efforts of the state, the scale of chloride pollution continues to grow. In 2008, New Hampshire recorded 19 chloride-impaired water bodies – by 2020, that number had risen to 50.

In 2013, New Hampshire launched its Green Snowpro certification training program for commercial applicants. The course explains best practices, such as using saline, which uses 50 percent less salt than rock salt, and setting up the technology to disperse deicer enough for safety. Certified operators and their customers are given limited liability for slip-and-fall lawsuits.

Landry said about 600 operators are trained in the program annually, and this will be extended to municipal drivers in the near future. The state produces about 400,000 tonnes of road salt every year.

Despite those efforts, the only solution is to use less salt, make the public understand what’s at stake, and lower expectations for road safety in winter.

“If you look at the winter severity index, we see similar trends in New Hampshire — we have more snow events as a result of climate change,” Landry said. “The only thing we can do is add less salt. That’s the real key; people’s expectation of what’s safe has to change.”

Please check your email to confirm and complete your registration.

Use the form below to reset your password. When you submit your account email, we will send an email with the reset code.

COVID-19 ushered in a new year – looking back, moving forward

Sigmund Freud, the ‘father of psychoanalysis’, 83 years after his death