Investors’ ability to buy and sell Russians assets such as stocks and bonds has deteriorated sharply in a sign that western sanctions are eroding the country’s links to foreign capital markets.

Clearstream, a group that plays a central role in the European financial system, has cut off settlement of trades in roubles as banks, fund managers and trading infrastructure operators begin to remove Russia from global markets because of sanctions on Russian banks such as VTB.

Luxembourg-based Clearstream told clients late on Thursday that settlement in transactions involving the Russian rouble, which covers assets such as stocks and bonds, would cease with immediate effect. At the start of trading on Friday, the London Stock Exchange also suspended VTB Capital, a unit of the Russian bank, from trading in the UK’s stock market.

Clearstream said its decision was because of “increasing demand from its customers”, underscoring how sanctions are already beginning to affect brokers and asset managers. The US, EU and UK on Thursday announced tough sanctions on Russian financial institutions and individuals but stopped short of directly halting trading activity in existing Russian assets or cutting the country off from the Swift financial messaging system.

Settlement houses play a lesser-known but vital role in the market by settling trades on behalf of investors. The two largest depositories, Belgium’s Euroclear and Clearstream, together hold about €50tn of assets in custody for global investors. Deals are usually finalized by transferring balances between customer accounts held at the depository.

The Clearstream prohibition also blocked its customers from conducting rouble-based deals with clients of Euroclear. The latter has not halted settlement of deals in roubles. It declined to indicate whether it planned to do so following its rival’s move.

Many of the Russia-related transactions between customers of Euroclear and Clearstream are facilitated by VTB, Russia’s second-largest financial institution. The US said the sanction on the bank would “sever a critical artery of Russia’s financial system”.

The Clearstream move comes as Swiss wealth management giants Credit Suisse and UBS have also slashed the amount they are willing to lend to private bank clients using Russian assets as collateral, according to people familiar with the decisions. Both have also assigned a “zero lending value” to many Russian bonds, such as those of sanctioned banks VTB and Sberbank, effectively rendering them unusable to raise debt 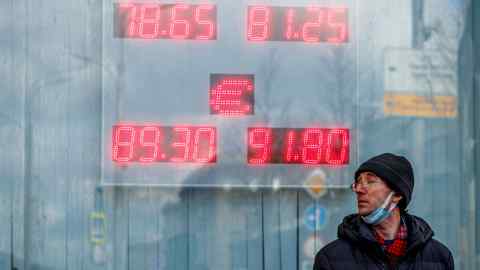 Similarly, Credit Suisse and UBS had been forced to trigger margin calls after the value of Russian corporate and sovereign debt plunged on Wednesday, the people added. Clients have been required to add new cash or securities to their accounts to cover the shortfall. Bloomberg first reported the developments regarding the wealth managers.

UBS declined to comment. Credit Suisse said it “serves its clients while complying with all applicable laws and regulations, including any sanctions from relevant authorities”.

Traders said activity on Thursday — when the prices of many Russian assets swung sharply lower — was “chaotic” as banks began closing their doors to Russian names ahead of impending sanctions.

Local brokers in Moscow, who act as intermediaries between big banks in London and the Moscow Exchange, struggled to keep up with demand, traders said. The situation was exacerbated by the Russian central bank’s decision on Thursday to implement a temporary ban on short selling, a method of betting stock prices will fall.

As Russian bond markets collapsed on Thursday, fund managers said it became almost impossible to trade the country’s debt, with banks quoting huge differences in the prices buyers and sellers were offering for the assets. At one point, a leading bank was offering to buy Russian government bonds at less than half the price it was prepared to sell.

“It’s still possible to sell [rouble-denominated Russian bonds] but you would have to pay a lot for the bank to take the clearing risk,” said one portfolio manager. Another investor at a big asset manager described trading in Russian sovereign dollar bonds as “by appointment only”.