What does “chimba” mean, the expression of the Colombian miner that caught the attention of President Abindar? 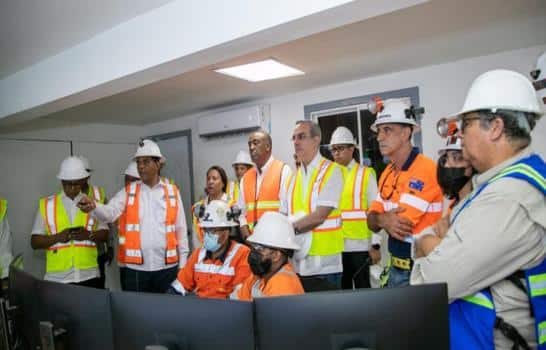 in conversation with the President louis abineder with both miners who remain trapped Cerro Mammon MineMonsenor Nol Province, one of those affected expressed a word that caught the president’s attention.

one of two minersColombian Carlos Yepez Ospina, thanking the President for the invitation to receive him at the National Palace when he was rescued, used the expression “To dig,

After this the President laughed and told him that he did not know what the word meant.To dig” as well as wishing a big hug to the Colombian “who is the most To dig,

“Well, I know about JV, I don’t know another word for To dig, The important thing is that everyone is there with faith and hope and they keep that spirit, that feeling that is setting an example and a whole country is waiting for you to leave soon, that Dominicans have a big hug who is most enthusiastic and Colombian who is most To dig”, said Abinadar miners by the radio when he visited this Thursday Cerro Mammon Mine,

What does that expression mean?

Word “To dig“There are at least three meanings to Colombians depending on the context in which it is used.

According to the “Abridged Dictionary of the Colombian Language” of the Colombian Academy of Languages, the word is an adjective that refers to “good”, “beautiful”, giving the expression que as an example. To dig From home!

Similarly, the Academy states that the term is also used to refer to something that happened by chance, by chance.

The dictionary also indicates that the expression is also used colloquially to refer to the vulva.

While the Federation of Spanish Language Academies, a unit that brings together 23 academies from the Americas, Spain, the Philippines and Equatorial Guinea, maintains that the term has different meanings depending on the country where it is used. Is.

The unit indicates that in Colombia “To dig“A good or excellent thing and is also used to refer to a person who looks good.

He says that in Peru it refers to the opposite bank of the river, and in Honduras it is a handcrafted firearm.

loss miners Carlos Yepez Ospina (Colombian) and Gregory Alexander Mendez Torres (Dominican) are trapped after a landslide at the Cerro de Mammon mine on Sunday morning.

Rescue efforts are led by an internal relief team from the Dominican Mining Corporation (Cormidome), the company in charge of designing the mine.

How did the Celtics get in the clutch while the Warriors slept?