What is the island of millionaires in Miami like and who are its chosen inhabitants? 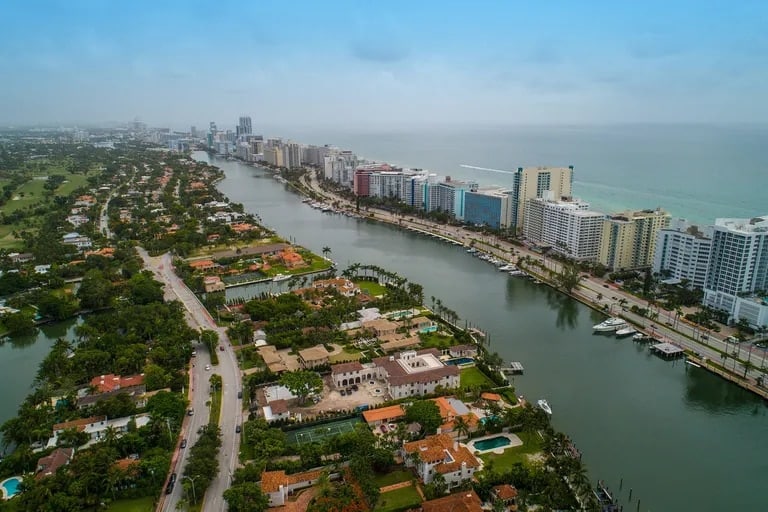 With only one square kilometer of surface area and only 82 permanent residents according to the last census, Indian Creek Island, Miami is the most exclusive area in the entire United States. Celebrities and millionaires are drawn to her like a magnet, especially as she offers the opportunity to combine a glamorous life, albeit away from the public eye and media siege.

The area consists of about 30 dwellings, which are located along the perimeter of the island. centrally located A golf course and a clubhouse are reserved only for the celebrity few. In fact, even owning a property does not guarantee access to the club. and tour? don’t dream; They are not allowed.

The privacy offered by Indian Creek Village its inhabitants make it worthy of the title of “Millionaire Bunker”. To ensure safety, it is It has its own police patrolling 24/7. At the same time, to protect the houses from the sea side, it is working on installing an infrared system around it.

The cost of a property in this area is around $500 million., Beyond money, however, many deals are typically done within a closed circle of investors or between personalities: “Sometimes these houses do not reach the market. The most recent sale, for $40 million, was an exchange between acquaintances. other properties come on the market; They take longer to sell because many interested parties cannot afford these prices. Naturally, it is difficult to find the right buyer”, explained real estate agent Dina Goldentare of Douglas Elliman in a previous interview with La Nación.

Indian Creek Island Village was officially established in 1939. The first homes built on the land were vacation homes for Miami’s rich and famous. Although none of the original buildings remain, some date back to the 1950s.

Among the first celebrities to settle on Miami’s exclusive island The case of the Spanish singer Julio Iglesias is known, who was among those who obtained additional land and recently ended up selling it for a total of US$150 million. Next up, other residents of the pickiest neighborhoods in the United States:

before you Divorce with Gisele Bündchen, the couple had bought a property on the island which they had demolished. At the same time, they were in the process of building a new residence; Brady is believed to be keeping the $17 million mansion, while the supermodel bought a $11.5 million mansion, which is located in Miami’s Surfside, right across from the house where her now ex-husband lives. lived together, as revealed page six,

In late 2020, it was reported that the daughter of former President Donald Trump and her husband were among the buyers of the land that singer Julio Iglesias had put up for sale since 2017. US$30 million.

Founder of the Sears store chain He acquired a property on the island in 2012 and has since become one of the most frequent users of the exclusive 18-hole golf course, the entrance to which is meters from his residence. From here he is said to have managed the destinations of the company till his resignation as CEO in 2019 after the brand went through a severe crisis.

This Colombian businessman and owner of the conglomerate that controls companies such as Publicaciones Semana, Banco GNB Sudameris, Lulo Bank and Servibanca, is one of the newcomers to Indian Creek. According to the information given to the real estate information portal, at the end of 2021, he will buy the mansion of Brazilian model Adriana Lima for about 40 million US dollars. the real deal,

Another important person in the business world who lives in this little paradise of millionaires is the CEO and owner of the Dutch company Bakker Magnetics, who bought his property from singers Beyonce and Jay-Z in 2010 for less than US$10 million. , one of the reported lowest transactions in the region forbes,

The Sofer family is known as “Miami real estate royalty” and the home now occupied by the founder of Turnberry Associates and Fontainebleau Development previously belonged to his older sister, Jackie Sofer, who in 2020 sold it to him for approximately $17 million.

The son of the Spanish singer, Julio Iglesias, and the Russian tennis player have been together for more than 20 years. Although he keeps his personal life away from the limelight, he is known to love spending time with his family at his mansion on Indian Creek in Miami, Florida.