With the left foot: Boca Juniors fell 2-0 to Deportivo Cali for Group E of the Copa Libertadores 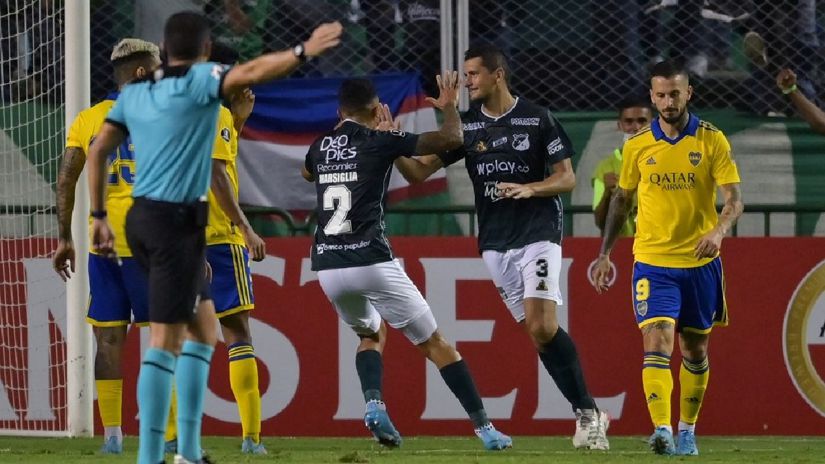 The Colombian champion, Deportivo Cali, made Boca Juniors’ debut in Group E of the Copa Libertadores bitter on Tuesday by beating them 2-0 with a goal from Argentine central defender Guillermo Burdisso, who wore the Xeneize team shirt for four years. and another from the winger Jhon Vásquez.

The Colombians, who came into the match penultimate in the local tournament, got the victory thanks to the good performance of midfielder Kevin Velasco, who provided two assists in a hard-fought game, with few opportunities and marked by strong play.

In the first few minutes, the Xeneize team began to attack led by the Paraguayan Óscar Romero, a headache for the midfielders of the Azucarero team, and by the youthful Exequiel ‘Changuito’ Zeballos, who finished twice at the goal of the Uruguayan Guillermo de Loves in this section.

Meanwhile, the Colombians had their clearest opportunity of the first half at minute 13 when goalkeeper Agustín Rossi blundered in the clearance in a counterattack and the ball fell to winger Yony González, who got tangled up and ended up early by Peruvian central defender Carlos Zambrano .

With the passage of time, the game fell apart and Boca lost the clarity of the first minutes, although it was close to scoring again in a play at 39 in which a double save by De Amores saved Cali, since he first covered a shot from half distance from Darío Benedetto and then deflected the rebound shot, made by Zeballos.

The goals in the second half

In the complementary stage, the game got even more tangled and the teams had many difficulties to create opportunities, to which was added the terrible state of the grass of the Deportivo Cali stadium.

The flashes of Teo Gutiérrez brought the Azucareros closer to Rossi’s goal, while Romero continued to be the most important of the Argentines, although in the second half the Paraguayan had to look for the ball many times in his own territory because very little was reaching him .

When the game looked more tangled, the hosts opened the scoring at 69 on a free kick from the right side that Velasco took and that Burdisso managed to head the ball, despite how hard it was, to send it to the back of the net and put celebrate Venezuelan coach Rafael Dudamel.

Boca, stunned by the score, received the second blow ten minutes later when Velasco, in a great play down the left flank, overflowed and sent a creeping center to Vásquez, who appeared like a ghost and with a left-footed shot sentenced the game in favor of the Colombians.

On the second matchday, scheduled for next week, Xeneize will receive the emboldened Always Ready on Tuesday, while the Azucareros will visit Corinthians on Wednesday.

(With information from EFE)

Boca Juniors vs. Deportivo Cali: schedules in the world

While, Deportivo Cali, just like the Bombonera club comes from obtaining a tie in the domestic league. Those commanded by the former coach of the Venezuelan National Team Rafael Dudamel, equaled goalless on the visit against La Equiedad and with that result they remain at the bottom of the standings this new season by placing themselves in the eighteenth box, with only 12 points. just three units from last place.

Despite the fact that the ‘Sugar Bowl’ in this new period has not been showing its best version, it will impose local respect against mouth and will try add his first victory and thus begin to consolidate himself in the international contest, which will dispute after six years. In its last participation in the Cup, 2016 season, Cali was eliminated by finishing in the last box of group 3, which it shared precisely against its current rival, Racing and Bolivar.

When and what time do Boca Juniors vs. play? Deportivo Cali?

Boca Juniors vs. Deportivo Cali will collide in a vibrant game this Tuesday, April 5. The contest between both teams is agreed at 7:30 pm (Peruvian time). In Argentine territory the match begins at 9:30 pm The match will take place at the Deportivo Cali Stadium.

Where and how to watch LIVE Boca Juniors vs. Deportivo Cali?

The game will be broadcast LIVE on ESPN and Star+ in South America. RPP.pe will bring you the goals, best plays and incidents.

The COVID-19 pandemic has claimed the lives of 211,000 Peruvians and today the numbers of infections and deaths show a hopeful downward trend. Even so, it is difficult to forget what regions like Lambayeque, Loreto and Ica went through, hard hit by the virus.