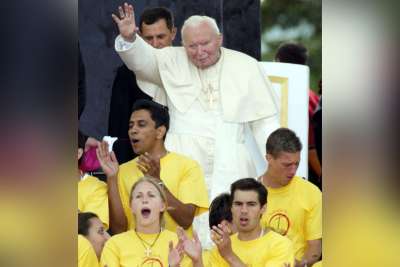 It has been 20 years since Pope John Paul II visited (give or take) Canada, and Canada is once again honored with a visit by the Pope.

But the two journeys couldn’t be more different. Pope Francis, to his credit, has come to Canada bowing his head as he seeks to make up for the Church’s difficult past with the native peoples of our country, apologizing for the wrongs the Church has done to indigenous peoples. Contrast those joyful – and hot and steamy – days of 2002. Pope John Paul II arrived in Toronto and probably heard the joyful voices of thousands of pilgrims descending on the city for World Youth Day as he took the first steps. Papal plane that landed at Pearson International Airport. This would be the future saint’s third and final visit to Canada, and a feeling of unprecedented joy infecting every part of the city.

It was a joy that was slowly growing, certainly since Toronto was awarded World Youth Day. Father Thomas Rosica and his organizing team, almost anonymously, had been working behind the scenes to put the event together for years, and now it was here. And what will it be like?

Anyone living in Toronto would be hard-pressed to forget the days when thousands of young people flocked to the city, bringing with them their youthful – and confident – ​​enthusiasm.

Churches around the world were in crisis when international headlines flashed over a sex-abuse scandal in Boston earlier that year. In an increasingly secular world that was already turning away from religion altogether, and the Catholic Church in particular, it made for some very dark days.

But all that seemed to be sunk into the background, all because thousands of young people were here and were not hesitant to shout their love for Jesus, God, their Catholic Church and a pontiff who, regardless of their age, was the one who was their own. believed together.

Those were exciting days for the church in the city and beyond. No matter where you went, you couldn’t help but run into over 100,000 pilgrims – conveniently marked by their red backpacks, half of which were worn on the pilgrims’ chests – and feel the energy they brought with them. While doing when they celebrated their faith together. Whether it was at Canada’s National Exhibition Grounds, where the event was focused or elsewhere, they shouted “We are here and we are proud of our faith.” He was literally “the salt of the earth and the light of the world.”

And then there were the 800,000 or so who weathered one of those rogue Southern Ontario storms that temporarily shed all moisture in the air, only to return in a more oppressive manner when the rain stopped, Pope Vigil in Downsview Park to celebrate. Thousands of people were out in the open air, and as can be seen in Michael Swan’s photographs from that magical evening, they found some way to take shelter from the storm.

It had been many years since I was on CNE’s grounds, and the joy I remembered from the rides, food preparation, music and ball games in between couldn’t hold the candle to what I found there during World Youth Day. Pilgrims dance to the music that emanates from the Catechis sessions, proudly hoisting the flags of their homeland as they chat with new friends from other countries. It was an incredible performance.

From register In perspective, it was a boon to us that we could reconnect with that part of the population that had been given less time in previous years. Led by Paula Antonello, register Started his popular youth speak news section which has launched many journalism careers and is still thriving over two decades. Outside of us, WYD also planted the seeds of Salt + Light TV, Canada’s national television broadcaster. And the promotion of the church that is pulling back so many young people cannot be underestimated.

The inukshuk built for the event remains as a city heritage project for WYD 2002, standing at Battery Park near Ontario Place on the waterfront as a reminder of those faith-filled days in the city. It stands, as these structures do, as a solid guardian overseeing the land, a safe harbor, as Jesus is for Christians.

Certainly, our church has had its problems – look no further than Pope Francis and the reason he is here now. May not be a celebration of faith in your face 24 hours a day as it was 20 years ago for five days in July. But rest assured, it’s there, and it’s good.

Canada, the last frontier of the Spanish conquest

The Seahawks Are Playing Quarterback Chicken, And Maybe That’s OK

Loons can use hot Emanuel Reynoso in the playoffs