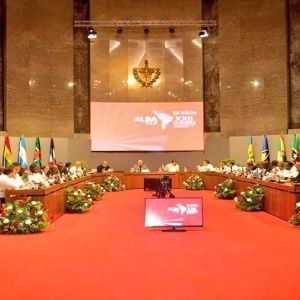 The XXII Summit of the Heads of State and Government of the Bolivarian Alliance for the People of Our Americas (ALBA-TCP) was inaugurated this Wednesday at the Palace of the Revolution in Havana, Cuba.

The President of Cuba, Miguel Díaz-Canel, received the officials of the member states along with their respective delegations, which included his Venezuelan counterpart Nicolás Maduro; Bolivia, Luis Arce; and from Nicaragua, Daniel Ortega.

Also, the Prime Minister of Saint Vincent and the Grenadines, Ralph Gonsalves; from Dominica, Roosevelt Skerritt; among other officers. As of now the session is taking place behind closed doors.

| After attending a session of the Cuban Parliament that celebrated the 18th anniversary @ALBATCPLeaders and representatives of their countries move to the headquarters of the Presidency of the Republic where they are officially welcomed @DiazCanelBsummit host pic.twitter.com/RRrOkjFs3R


Earlier, leaders and prime ministers attended an extraordinary session of the National Assembly of Popular Power of Cuba to mark the 18th anniversary of ALBA-TCP.

In that meeting, they reiterated the importance of union and regional cooperation for the well-being of the peoples, as well as the rejection of destabilizing efforts and external interference in the countries of the continent.

Hours earlier, the Cuban President recalled through his account on the social network Twitter that on this day “we will celebrate the 18th anniversary of an important event: the birth of ALBA-TCP, the integrationist dream of Fidel (Castro) and (Hugo) Chávez ” .

Díaz-Canel commented, “Welcome Cuban, Latin American and Caribbean brothers. We will continue to show that cooperation and solidarity is our way.”