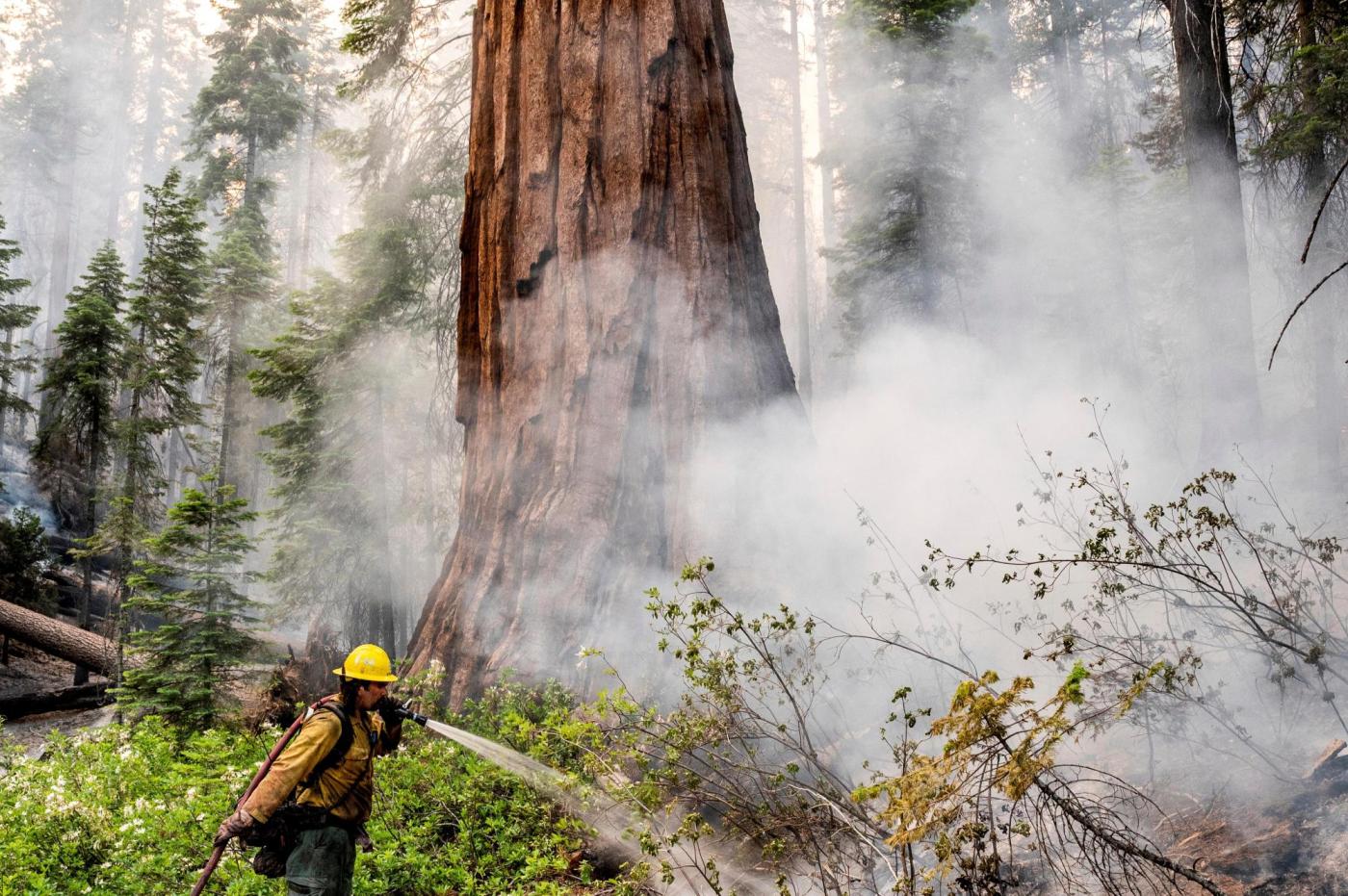 YOSEMITE NATIONAL PARK, Calif. — A wildfire threatening the largest grove of giant sequoias in Yosemite National Park more than doubled in one day, and firefighters were working Sunday to protect the iconic trees and a small mountain town.

Campers near the fire were evacuated, but the rest of the sprawling park in California remained open, though smoke billowing into the air obscured some scenic views.

More than 500 mature redwoods were threatened in Mariposa Grove, but there were no reports of serious damage to any named trees, including the 3,000-year-old Grizzly Giant.

The cause of the Washburn fire was under investigation. It had grown to nearly 2.5 square miles (6.7 square kilometers) by Sunday morning.

Beyond the trees, the community of Wawona, which is surrounded by parks and a campground, was under threat and people were ordered to leave their homes and campsites on Friday night.

The fire was proving difficult to contain, and firefighters launched “every conceivable tactic,” including dropping fire retardant from the air, said Nancy Phillipe, a Yosemite fire information spokeswoman.

Firefighters planned to use bulldozers to create fire lines to protect Wawona, he said. About 600 to 700 people staying in tents, cabins and a historic hotel at Camp Wawona were ordered out.

Temperatures were expected to rise and reach the lower 90s in the coming days, but fire crews working on steep terrain weren’t facing high winds, said Jeffrey Barlow, chief meteorologist for the National Weather Service in Hanford. Smoke had settled in large swaths of the park, but the fire was not sending up the huge plumes seen the day before, Barlow said Sunday.

Given the relatively small size of the fire and minimal winds, smoke impacts were not expected to spread much beyond the park, he said. So far in 2022, more than 35,000 wildfires have burned nearly 4.7 million acres, according to the National Interagency Fire Center, well above the average for both wildfires and acres burned.

Native to only about 70 groves spread along the western slope of California’s Sierra Nevada mountain range, giant sequoias were once considered impervious to flames but have become increasingly vulnerable to wildfires fueled by the brush buildup from a century of fire suppression and droughts exacerbated by climate change have become more intense and destructive.

Phillipe, the park spokeswoman, previously said some of the huge logs had been wrapped in fire-resistant aluminum foil to protect them, but corrected herself on Sunday, saying that was not the case with this fire.

Wildfires sparked by lightning in the last two years have killed up to a fifth of the estimated 75,000 large sequoias, which are the largest trees by volume.

There was no obvious natural spark for the fire that broke out Thursday along the park’s Washburn Trail, Phillipe said. Visitors walking in the grove that reopened in 2018 reported smoke after a $40 million renovation that took three years.

A fierce windstorm hit the grove more than a year ago, toppling 15 giant sequoias, along with many other trees.

The fallen trees, along with a large number of pine trees killed by bark beetles, provided enough fuel for the flames.

The park has used prescribed burns to clear brush around the redwoods, helping to protect them if the flames spread further into the grove.

Meanwhile, most evacuation orders were lifted Saturday in the Sierra foothills, about 80 miles (128 kilometers) northwest of the Yosemite fire, where a fire broke out on July 4. directly within the perimeter of the fire remained under evacuation orders, according to the California Department of Forestry and Fire Protection.

This story has been corrected to correct inaccurate information from a park spokesperson and to reflect that the tree trunks are not wrapped in protective foil.