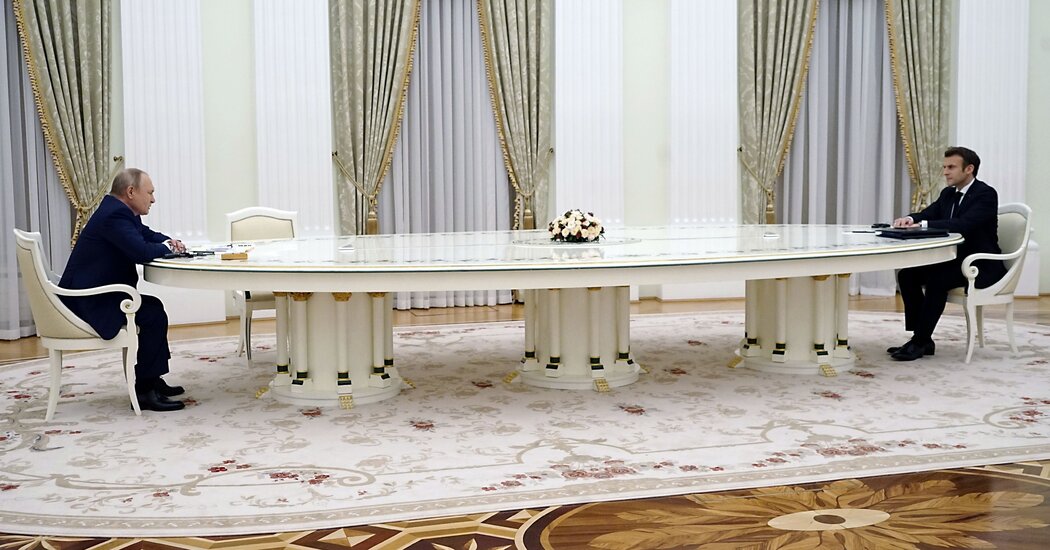 We’re covering meetings on the Ukraine crisis in Moscow and in Washington and a state of emergency in Canada’s capital over trucker protests.

President Emmanuel Macron of France said that Europe was at a “critical crossroads” as he met in Moscow with President Vladimir Putin of Russia. In Washington, President Biden met with Germany’s new chancellor, Olaf Scholz, to discuss Russia’s military buildup at Ukraine’s borders. Here are the latest updates.

Macron said that he hoped the meeting on Monday would begin a process of de-escalation. “This dialogue is absolutely essential, more than ever, to ensure the security and stability of the European continent,” he said.

Putin’s spokesman said that “a very substantive and lengthy conversation” was expected, but he played down expectations of major progress. “Of course, the situation is too complicated to expect some breakthroughs as a result of just one meeting,” he said. The French president will hold talks in Kyiv, Ukraine, tomorrow.

At a joint news conference in Washington with Biden, Scholz called the Russian troop buildup “a serious threat to European security.”

Biden’s advisers had expressed concern that Germany was reluctant to impose punishing economic sanctions on Russia in the event of an invasion, or to call off a controversial gas pipeline project, Nord Stream 2.

“What is important is that we also intensively work on preparing possible sanctions together. We don’t want to start once there is a military aggression against Ukraine,” Scholz said.

background: Putin is demanding a rollback of NATO’s presence in Eastern Europe and has massed troops near Ukraine’s borders — about 130,000, according to US and Ukrainian officials. They say it appears to be preparation for a full-scale military assault.

Did Israeli police spy on citizens?

Reporters and watchdogs have exposed how spyware from the NSO group, an Israel-based surveillance firm, has been sold to authoritarian governments, who used it to hack phones. Now the Israeli government has said it will investigate claims that the Israeli police used spyware against its citizens without a court order.

The allegations have caused a brief delay in the corruption trial of Benjamin Netanyahu, the former prime minister, amid claims that the police illegally hacked the phone of a key trial witness.

Details: Israeli outlets began last month to report claims that the Israeli police used NSO’s flagship product, Pegasus, to extract information from the phones of local activists, politicians, businesspeople, civil servants, and both critics and associates of Netanyahu. The Israeli business daily Calcalist released a list of dozens of citizens whose phones were hacked.

Canada’s capital is in a state of emergency

Unrest in Ottawa began with protests by truckers over vaccine mandates imposed by the government of Prime Minister Justin Trudeau. After 11 days, the mayor declared an emergency. Ottawa’s City Council was to meet Monday to try to find a way out.

During the demonstrations, some desecrated national memorials and threatened local residents. The protests have shaken a country known globally as a model of peace.

Thousands of demonstrators turned out in Toronto and Quebec City over the weekend. Truck convoys congregated in Alberta, Saskatchewan, Manitoba and British Columbia.

Quotable: “Someone is going to get killed or seriously injured because of the irresponsible behavior of some of these people,” Jim Watson, Ottawa’s mayor, warned on Sunday. City officials and the chief of police said they were under “siege.”

Context: Polls show that most Canadians support Covid measures such as mask and vaccination rules and occasional lockdowns. The protests are an expression of frustrations as the pandemic enters its third year.

Here are the latest updates and maps of the pandemic.

Ten years ago, psychologists speculated that a wide range of people would suffer anxiety and grief over climate change. Now, eco-anxiety, a concept introduced by young activists, has entered the mainstream. Professional organizations are exploring approaches to treating a dread that is both rational and existential.

Who gets to be British?

For the release of the podcast “The Trojan Horse Affair,” The Times asked three Britain-based writers to explore the complexities of British Pakistani identity. Mohsin Zaidi, a lawyer, considers whether his community has access to the club of Britishness. Here’s an excerpt.

Rising to begin cross-examination, a knot of discomfort tightened in my gut. As a barrister, I had a job to do, but I felt deep unease about prosecuting the young Pakistani teenager in the witness box. If it weren’t for my ivory wig and black gown, he and I would look quite similar. And yet, we stood at opposing ends of this wood-paneled London courtroom.

Almost half of all Pakistani children in Britain grow up poor – one of the highest proportions of any ethnic group. This number included the defendant and it also included me: Both of us were raised in public housing and attended failing schools. Our starting points in life were not so different but, through a combination of hard work and luck, I became the first from my school to study at Oxford University and then went on to join the legal establishment as an associate at a top law firm, a clerk at the Supreme Court and then a criminal barrister.

After the cross-examination was done, and I had successfully undermined his version of events, the teenager whispered “traitor” as he passed me on his way back to the dock. How could I and this teen be so far apart?

For a number of Pakistanis, race and ethnicity lie at the heart of their exclusion from claiming a British identity. Much of the country’s racist history has, up until recently, gone untold. The slur “Paki” started life in the mid-1960s as an epithet against immigrants and “Paki-bashing” became a favored pastime of racist thugs. As recently as the 1980s, forced busing, an instrument of the American civil rights movement, also took place in parts of Britain.

Michelle Wu is the first woman and the first colored person to be elected mayor of Boston.