Zapopan: Irregular mass transport collides and 15 are injured due to overweight 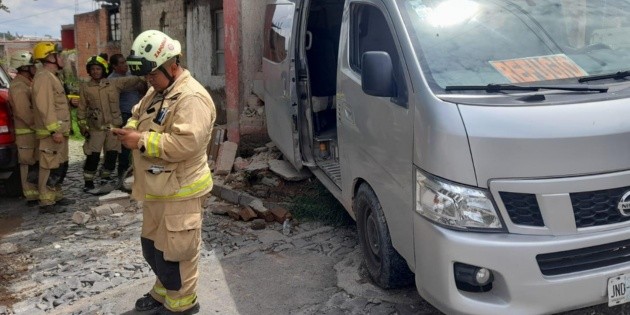 Due to the overweight in the Urvan-type vans used as mass transportation in the neighborhood cold water in zapopanThe driver of the unit lost control and went against the door of a house, injuring a total of 15 passengers in a routine health checkup.

a type of vehicle that charges 15 pesos and travels in the northern part of zapopan Irregularly, they usually make their transfers with overcrowding.

The accident happened this Sunday afternoon at around 3:15 pm at the intersection of the streets spring and hidden water, where firefighters received reports of a public transportation unit involved in an accident. Upon arrival, rescuers realized it was irregular.

Nissan Urvan with plates JND5973 in white and a sign with orange letters on it that said RefugeesAll the paint on the back was damaged.

“When we reached the place we realized that it was a mass transport, trying to go on the road Due to the overweight, he could not increase the power of the motor, the unit stalled and the brakes blocked and he got out of control and hit the house in the back. In total, 15 people were slightly injured and transferred from our coordination green cross for help center federalism“, remarked the first officer firefighter Juan Carlos Lopez Rodiles.

The house had no structural damage, nor was there any risk of collapse, as the truck only hit the door, which was made of iron.

Get the latest news in your email

Everything you need to know to start your day